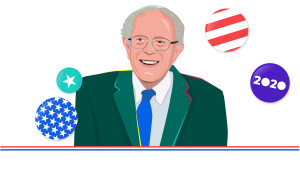 After losing the 2016 Democratic presidential primary to Hillary Clinton, Sen. Bernie Sanders (I-VT) is giving the whole running for president thing another go.

Sanders has been in the political game for decades. He ran his first campaign for a Vermont Senate seat in the ‘70s. He lost. But eventually went on to serve as mayor of Burlington, VT before heading to the US House, then becoming a US senator in 2007. He’s the longest serving independent member of Congress in history.

There are a few. Female staffers from his 2016 campaign have come forward with allegations that they had been sexually harassed or assaulted by male staffers. Sanders publicly apologized. And his 2020 campaign updated its guidelines for dealing with sexual misconduct. Meanwhile, there are concerns about Sanders’ health. He suffered a heart attack in Oct 2019 but quickly jumped back on the campaign trail.

Sanders wants to dive right into health care. He’s promised to intro his Medicare for All legislation during his first week in office. He says it’ll take four years to get everyone on his health care plan, but people 55 and older would be covered within the first year. Sanders has also pledged to legalize marijuana through executive action in his first 100 days. 11 states and DC have legalized recreational marijuana – but it’s still illegal on the federal level.

On abortion...he says his Medicare for All plan will cover reproductive health care, including abortions. Although he has voted in favor of the Hyde Amendment in the past, he now says he would get rid of it. The amendment limits federal funding for abortions.

On climate change...he’s telling the other Dems, ‘I see your climate change plans and raise you all of the money.’ At $16.3 trillion, his is the most expensive plan in the game, with other plans ranging between $1 and $10 trillion. Here’s what Sanders says you’d get for it: 100% sustainable electricity and transportation by 2030 and a carbon-neutral economy by 2050. His plan also promises 20 million new jobs plus assistance for farmers and former fossil fuel workers adjusting to a new economy. Sanders says he’d pay for his plan in large part by taxing and suing fossil fuel companies for trillions of dollars. How? Unclear. Would it stop climate change? Probably not. Could it mitigate some of the worst effects? Possibly – especially if other major greenhouse gas emitters follow similar plans. Sanders says averting the worst effects of climate change could save the US tens of trillions of dollars over decades.

On the economy...for years he’s pushed the message that the economy is “rigged” in favor of Wall Street and the rich. To combat this, Sanders wants to do things like increase tax rates on the wealthy and enact a $15/hr minimum wage (although he’s reportedly had issues implementing this even with his campaign staff). He also thinks employees should have more ownership stake in the companies they work for. Also, he doesn’t think billionaires “should exist.” He proposes a wealth tax on Americans worth more than $32 million – and wants to use the money to fund his housing plan, universal child care, and to help fund Medicare for All.

On education...part of his 2016 run was a proposal to make four-year public college tuition-free and lower student loan interest rates. He hasn’t changed his mind. On top of that, he wants to bump up teachers’ salaries, ban for-profit charter schools, and guarantee free breakfasts, snacks, and lunches year-round for all students.

On guns…he has a complicated history. In the past, he’s taken positions in line with the NRA. Including voting against legislation to establish a national background check system. Now he’s turned it around and says he wants to expand background checks and ban assault weapons.

On health care...Medicare for All is his baby. As in a government-run health insurance program available to all Americans. He’s been talking about it since his 2016 run. This time around, he unveiled a new plan that goes even further by pretty much getting rid of private health insurance. Critics say this will cost way too much.

On immigration…putting a moratorium on deportations is at the top of his to-do list. Next up: decriminalizing illegal border crossings, abolishing ICE, and creating a path to citizenship for all undocumented immigrants. He also plans to overturn Trump’s “racist and disgusting” executive order that restricts travel from multiple Muslim-majority countries. And surprise: he’s not a fan of extending the US-Mexico border wall.

On national security…he says the greatest threat to national security is climate change. Full stop. He voted for the Obama admin’s Iran nuclear deal and would rejoin it if elected. He’s also vowed to withdraw from Afghanistan and to end support for Saudi Arabia’s intervention in Yemen.

On social justice…he’s high on legalizing marijuana in all 50 states, seeing it as part of ending the war on drugs. His plan would also expunge past marijuana convictions. He’s vowed to close for-profit prisons and to put a stop to cash bail. If elected, he’d pass the Equality Act, which would ban discrimination against the LGBTQ+ community when it comes to things like jobs, housing, education, and public spaces.

In 2016, Sanders’ far-left policies helped him stand out on the campaign trail, and had a huge group of supporters saying ‘Bernie or bust.’ Now he’s competing with a pool of Democratic candidates who have embraced those policies themselves. But he’s consistently been one of the top contenders in the Dem race.