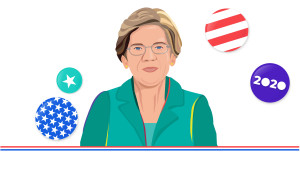 A longtime critic of President Trump, Sen. Elizabeth Warren (D-MA) is here to try to flip the White House for the Dems.

Senator since 2013, and former Harvard law professor who laid the groundwork for what became the Consumer Financial Protection Bureau. She has a reputation for putting a lot of pressure on the financial industry for the way it does business.

Even if you don’t know her, you’ve probably heard about the controversy around her ancestry. For years, she’s claimed Native American heritage and identified as a minority. Then President Trump challenged her to prove her ancestry – and has repeatedly referred to her as “Pocahontas.” She got a DNA test to try to prove her Native American background. The test indicated she had a Native American ancestor dating back six to 10 generations. People called the move tone-deaf and she later apologized. As part of her run for president, she’s released a plan focused on addressing tribal rights and concerns including land access, infrastructure problems, and violence against indigenous women.

Another elephant in the room: how she’ll pay for all the plans she keeps dropping. The US Chamber of Commerce has labeled at least one plan to raise taxes unconstitutional. Meanwhile, the American Bar Association thinks her proposed wealth tax is good to go. That’s one thing she says will help pay for her universal health care plan. She’s gotten heat from people skeptical that the she’d have the money to pay for the plan or that it has a realistic shot at passing in Congress.

At the top of Warren’s to-do list: passing legislation aimed at cracking down on corruption in DC. Think: banning members of Congress from ever becoming lobbyists and requiring anyone running for federal office to make their tax returns public.

And although she took her time before releasing a health care plan, she’s pledged to offer a public health insurance option within her first 100 days. It would be free for children and lower-income families, and others can pay to opt in. Eventually, she would phase out much of the private insurance market and make national health insurance free (read: funded in large part through taxes) for everyone.

On climate change…she’s embraced a climate change plan to eliminate greenhouse emissions from power plants, cars, and buildings over 10 years. The plan would cost $3 trillion, and Warren says it would be fully paid for by reversing tax cuts passed in 2017. Warren also endorses the Green New Deal. Part of her plan includes investing $2 trillion in research and manufacturing of clean energy technology to fight climate change while boosting the economy and creating jobs.

On the economy…she wants to invest in housing to bring down rents by 10% while also creating 1.5 million new jobs and start closing the racial wealth gap. Ambitious. She also has what she calls her ultra-millionaire tax: it will target the richest 0.1% of Americans to raise nearly $3 trillion that can be used to “rebuild the middle class.” She’s also proposing to break up Google, Facebook and Amazon, and to ban companies with over $25 billion in revenue “to act as operators and users of a platform.” She also wants to have regulators review already-closed mergers – like the Bayer-Monsanto merger. Oh, and she wants to give workers a boost by doing things like expanding the right to unionize and upping the federal minimum wage to $15 an hour.

On education…she wants free (read: taxpayer-funded) public college for everyone. She’s pitching the cancellation of up to $50,000 in student loan debt for American families who make less than $100,000 a year. She wants universal child care from birth to school age – free to families that make less than 200% of the federal poverty line and what she describes as affordable for everyone else. (She has a calculator for you to figure out how much it would cost you.)

On guns…she has a plan that she hopes will reduce gun deaths by 80%. That includes requiring background checks at gun shows, banning assault weapons, and establishing a one-week waiting period for all gun purchases. She also wants to investigate the NRA for corruption. And has joined other lawmakers in calling for a redo of a federal investigation into the danger guns pose for children and schools.

On health care...three words: Medicare. For. All. The phrase you’ll be hearing her say over and over again? ‘Not one penny.’ That’s how little the middle class will be taxed for her health care plan, which she says will cost $20.5 trillion over a decade. Warren also plans to reduce drug costs, undo Trump admin policies (like ending the Medicaid work requirements), and address the maternal mortality crisis.

On immigration…she also has a plan for that. It includes getting rid of criminal penalties for illegal border crossings, instead making it a civil offense; banning for-profit detention centers; raising the refugee cap (which the Trump admin lowered) to 125,000 refugees in her first year in office; and establishing a Justice Dept task force to investigate alleged mistreatment of migrants by the Trump admin.

On national security...she’d bring US troops home and reduce defense spending. Plus rejoin the Iran nuclear deal. She also wants tech companies to crack down on extremist content on their platforms to reduce the threat from white nationalism.

On social justice...first up, she’d work to pass the Equality Act that she co-sponsored. If passed, it would ban discrimination against the LGBTQ+ community when it comes to things like jobs, housing, education, and public spaces. She also wants to legalize marijuana and end the cash bail system.

Warren’s approach to the 2020 campaign has been to introduce a slew of policies. Some see it as a pragmatic approach to governance. Others see it as radical and unrealistic. Either way, she’s been falling behind as her rivals surge ahead.