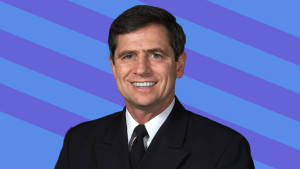 Sestak graduated from the US Naval Academy and has a master's and a PhD from Harvard. He’s a former three-star admiral who served in the Navy for more than three decades – including in Vietnam, Iraq, and Afghanistan (calls himself  “Admiral Joe”). He first entered politics after beating a 10-term incumbent for a House seat in 2006.

Well, his late entrance to the race has people questioning whether he can build up enough momentum. But Sestak says he delayed getting into the race to spend time with his daughter, who had been battling brain cancer. In the past decade, he's made two failed Senate runs. Some think that his presidential run might end up the same way.

On health care…he wants a public health insurance option but doesn't seem to want to get rid of private insurance. He’s also down with allowing lower-cost drugs to be imported from Canada.

On education…he calls this “our best homeland defense.” Sestak wants all four-year-olds to have access to early childhood education. He’s also looking to restructure federal student loans so the gov doesn’t profit off of them – but hasn’t given a lot of specifics on how that would work.

On climate change…he says yes to rejoining the Paris climate deal. He also wants to impose a fee on carbon polluters and give the EPA full control over regulating substances that contribute to climate change.

On women’s rights…he believes it’s up to women to decide what to do with their bodies. And as president, he’d push Congress to pass a law protecting abortion rights. In the House, Sestak intro’d legislation to help women-owned small businesses with grants – something he wants to continue in the White House. He also wants to close the gender pay gap by enforcing “equal pay for equal work.”

On immigration…he supports a path towards citizenship for undocumented immigrants in certain circumstances, and making sure all immigrants and asylum-seekers have the right to an attorney. He says there’s more to border security than stopping illegal immigration (think: curbing illegal drug trade and human trafficking) – but that the answer isn’t a wall. One of his ideas: use tech like drones and sensors instead.

Sestak’s pitching himself as a candidate with a variety of military and political experience. But that hasn’t helped him stand out in the crowded Dem field...at least not yet.