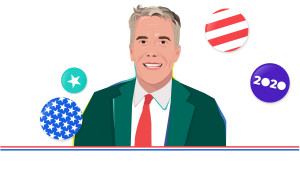 Joe Walsh wants to throw a Tea Party at the White House.

Conservative talk show radio host and former Republican congressman from Illinois. He only served one term because he lost his 2012 re-election bid.

There are a couple. For one, outlets keep referring to Walsh as a “longshot.” As polls keep showing, the vast majority of Republicans are in President Trump’s corner. In response to Walsh’s announcement, the Trump campaign had one word to say: “whatever.”

Meanwhile, Walsh has a history of using racial slurs and making controversial, baseless statements. That includes referring to former President Obama as a Muslim and saying that the country held him “to a lower standard cuz he was black.” About Sen. Kamala Harris (D-CA), he tweeted that “If you’re black & a woman, you can say dumb things. Lowered bar.”

Walsh has apologized for tweets like these. But it’s still unclear how he’ll make the case that he has the higher moral high ground over Trump, whom he once endorsed.

Walsh has pitched his primary campaign as a challenge to Trump from the right. He hasn’t released a campaign platform yet. But he’s made a series of statements on some of the key issues for 2020.

On the economy…Walsh rode the Tea Party wave when he got elected to Congress in 2010, railing against Obama and what he saw as executive overreach. He says he wants to address Trump’s “reckless” fiscal policies, high taxes, and the country’s increasing debt and deficit. He has issued warning bells about the deficit growing $100 billion a year under the Trump admin. And claims that Trump is “tweeting this country into recession.” He has also called Trump’s trade war with China “narcissistic” but has not said how he would handle trade differently.

On health care…he has made it clear that he’s against government-run health care. And rejected claims from the left that health care is a human right.

On climate change…Walsh has downplayed the threats from climate change. In 2015, he tweeted “lol climate change...or global warming...or whatever they're calling it now.” He’s also rejected claims that climate change constitutes a national emergency and praised a rollback of climate change research funding. Since announcing his presidential bid, he gave an interview saying the Republican Party needs to do more to confront climate change.

On education…one thing you can be sure of: he isn’t in favor of free college for all.

On immigration…Like Trump, Walsh wants to crack down on illegal border crossings. And tweeted that he’s in favor of building a US-Mexico border wall. He has also described undocumented immigrants as criminals. Unlike the Trump admin, he said he wouldn’t have separated families who crossed the border illegally in order to prosecute all adults. He says he would devote more resources to processing asylum claims, which he says the US has a “responsibility to hear.”

Joe Walsh went from a Trump supporter in 2016 to someone who now says Trump is “unfit” for office. He’s trying to present himself as a more conservative alternative – someone who would rein in government spending – and a leader willing to admit he’s made mistakes when it comes to his past controversial statements. But with the vast majority of Republicans lining up behind Trump, it’s not clear if anyone will buy his pitch.