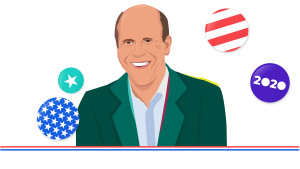 No, not the comedian – that's John Mulaney. John Delaney (D) was the first Democrat to announce a 2020 presidential run...all the way back in July 2017. Eager beaver.

Delaney is a businessman who founded two companies. Fun fact: he was once the youngest CEO on the New York Stock Exchange. He then went on to become a three-term congressman from Maryland.

We’ll say this again: He was the first Dem to enter the race back in July 2017. He’s putting all his efforts into the Iowa caucuses: he’s toured all of the state’s 99 counties and spent more than $1 million in TV ads there. (Btw, the Iowa caucuses don’t happen until February 2020.) Still, he's not as well-known compared to many of the other Dems running, despite being in the race longer than anyone else.

On infrastructure...he thinks investment in infrastructure is long overdue. His solution as a presidential candidate: a $2 trillion plan that includes creating an Infrastructure Bank that would help fund projects around the country.

On climate change…he’s down with a carbon tax to curb pollution and help fight climate change...but wants to redistribute the money from the tax to the American people. Also, he wants to introduce Climate Corps – a program that would let high school grads work in low-income areas to help communities develop environmental projects (think: installing solar panels, developing gardens).

On guns...he’s all for gun control. What that looks like to him: requiring background checks for every gun sale, banning semi-automatic weapons that have military-style features (think: AR-15), banning accessories that increase the rate of fire (think: bump stocks), and banning convicted domestic abusers from buying firearms.

On health care...he’s for a universal health care plan for all Americans under the age of 65, after which they’d enroll in Medicare. He’s made it clear he’s not for a single-payer, Medicare for All plan.

On abortion...he’s pro-choice and has spoken out against states restricting women’s access to abortion.

Delaney is looking to set himself apart from the crowd as someone committed to bipartisanship. But it remains to be seen whether he can get serious traction beyond Maryland and Iowa.