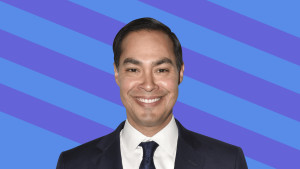 Julián Castro is running for president. Not to be confused with his identical twin congressman brother.

He’s a former mayor of San Antonio, TX and served as former President Obama’s Secretary of Housing and Urban Development. Fun fact: he was the youngest cabinet secretary in the administration. While at HUD, he expanded minorities' access to housing and expanded internet access in public housing.

He’s polling near the bottom of the pack. Progressives have also criticized him for how he handled mortgages as HUD secretary. The gist: a program he oversaw sold certain mortgages to banks at a steep discount in the wake of the 2008 financial crisis. Aka a time when banks weren't exactly everyone's favorite. It had critics calling him out for cozying up to Wall Street.

On health care...he wants Medicare for All. In one interview, he called reforming US health care a no. 1 policy priority. As in, it's the first thing he'd pressure Congress to take up once he's in office.

On education...he says he would set up a publicly funded pre-K program, like he did when he was San Antonio mayor in 2012. The idea is to set kids up for success from a young age, and help parents get back to work. He’s also called for tuition-free public college. He’s also proposing some student loan forgiveness for people who rely on public assistance like Medicaid or food stamps.

On climate change...he endorsed the Green New Deal and says his first executive order as president would be to bring the US back into the Paris climate agreement. As mayor of San Antonio, he got a city-owned utility to commit to 20% renewable energy by 2020.

On guns...time to renew to the federal assault weapons ban that expired in 2004 and close the so-called “gun show loophole” that makes it possible for people to skip a background check by buying from private sellers at gun shows. He also wants to crack down on the use of deadly force by police across the US, which he says can be “over-aggressive” and “racially discriminatory.”

On immigration...he has a pretty detailed plan. Some highlights: no to a US-Mexico border wall, yes to a pathway to citizenship for undocumented immigrants. Plus he says it’s time to reform (but not abolish) ICE, which has gotten pushback for its role in deportations under the Trump admin and enforcing the admin’s zero-tolerance policy (the one that led to family separations) policy. Castro thinks immigration law enforcement (as in deportations) should be handled by a different agency so that ICE can focus more on national security investigations.

Castro is the grandson of a Mexican immigrant from a working class, low-income background. He’d be the first Latino president, and is pitching his candidacy as an example of the American Dream. In order for his dream to come true, he’ll need to start polling higher.