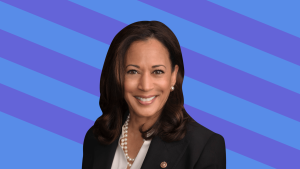 But recently, she’s tried to get back in the left’s good graces. She proposes overhauling the criminal justice system to end federal mandatory minimum sentences, the death penalty, solitary confinement, for-profit prisons, and cash bail. She also proposes legalizing weed on the federal level and getting rid of sentencing disparities for crack and powder cocaine offenses – disparities that some see as racially discriminatory.

On the economy…she’ll be showing off the LIFT the Middle Class Act – what she describes as the largest tax credits for working Americans in generations. It would offer cash payments to middle-class and lower-income households. Harris reportedly says she’d repeal the 2017 Republican tax law and replace it with LIFT. She wants to fight the racial homeownership gap by investing $100 billion to provide down-payment and closing-cost assistance to homebuyers who rent or live in communities where minorities have historically been denied loans for housing.

On education…she wants to make community college free, four-year public college debt-free, and universal pre-K. Through her LIFT Act, she’d like to give an income boost to about one in seven Pell Grant recipients. She also wants to close the teacher pay gap by giving the average public school teacher a $13,500 raise. Harris has proposed a plan that would forgive debts for "Pell Grant recipients who start a business that operates for three years in disadvantaged communities." But some criticized this plan, pointing out that many new businesses fail and might not make it to the three-year mark.

On guns…she says she owns a gun and called it a "false choice" that the only two gun control options are unrestricted access or seizing everyone's guns. She supports what she describes as “common sense” gun safety laws. To her that apparently includes universal background checks,  bans on assault weapons and high-capacity magazines, and a so-called “red flag” law to let courts temporarily take guns out of the hands of some people suspected to pose a threat. She says that if Congress doesn’t send comprehensive gun safety legislation to her desk within her first 100 days as president, she will take executive action.

On climate change…she’s released a $10 trillion plan to get the US’s greenhouse gas emissions to zero by 2045. It’s not clear how exactly the plan would be paid for, but she says it would require a combo of public and private funding. She also proposes ending subsidies to fossil fuel companies and setting up a carbon tax. And as a co-sponsor of the Green New Deal, she plans to transition the US to 100% renewable energy sources (think: wind and solar) for electricity within 10 years. Oh, and like pretty much every other Dem candidate, she wants back into the 2015 Paris climate deal.

Harris is one of a handful of female presidential contenders hoping to win the Democratic nomination. And as more people continue to get into the race, she’s working to appeal to progressive activists and moderate Dems by showing off her criticism of Trump and his administration.