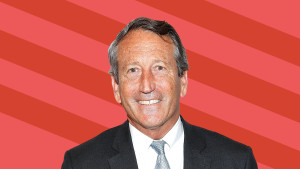 Before getting into politics, Sanford was a real-estate broker. Then he served as a congressman for South Carolina twice, from 1995-2001 and again from 2013-2019. In between those two stints, he was the state’s governor. Sanford lost his congressional primary race in 2018 to a Trump-endorsed opponent.

Sanford’s political career took a hit in 2009. That’s when he disappeared for about a week and told his staff he was hiking the Appalachian Trail...but he was actually having an extramarital affair with a woman in Argentina. He’s since apologized for the scandal. On top of that, Sanford has been a vocal critic of Trump, calling him out on issues like excess gov spending. That could be a turnoff for Republican voters, especially since Trump has a nearly 90% approval rating within the Republican party. What also won’t help him: Sanford’s home state is one of several states that have decided to simply support Trump’s re-election and canceled their Republican presidential primaries.

On the economy…he was once rated one of the country’s most fiscally conservative governors by a Libertarian think tank. He says keeping spending and debt in check are his main priorities. He’s blasted the Trump admin for pushing national spending, debt, and the deficit “to, and over, the cliff.” But Sanford voted in favor of the 2017 Republican tax plan – something that’s contributed to a rising deficit.

On health care…he co-sponsored a bill that would have replaced the Affordable Care Act with private health care options. He has said it would give people the insurance they need, instead of the insurance “the government prescribed.” He’s also said that one: it’s important to take time to debate what the right health care options are for Americans, and two: healthcare shouldn’t be a partisan effort.

On abortion…he’s anti-abortion. One example: he voted to repeal a rule that requires local govs to distribute federal funds to health centers, even if they perform abortions.

On the environment…as a congressman, he worked with other Republican lawmakers on a resolution that urged the House to “address the causes and effects” of climate change. But he thinks a carbon tax could hurt the economy and is reportedly skeptical of international climate deals that go too easy on high-polluting countries like India and China.

On immigration…even if he doesn’t always agree with Trump, there’s one thing they both agree one: a US-Mexico border wall.

On guns…he supports the Second Amendment and voted in favor of making conceal-carry permits valid in other states.

Before his affair became public, Sanford was rumored to run for president. But that scandal and last year’s congressional race have bruised his political career. And many analysts see the prospect of him moving to 1600 Pennsylvania Ave as pretty slim.