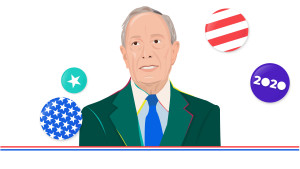 One of the world’s richest people is running for president. Hi, Mike Bloomberg.

His first job after grad school was at investment bank Salomon Brothers in the 1960s. In the 1980s, he founded Bloomberg LP – a financial data and news company where he was the CEO (he’s taking a break from that role while he’s in the race). He was NYC mayor from 2002 to 2013. He’s switched political parties multiple times: he was first elected mayor as a Republican, then registered as an independent, and hopped on the Democratic train in 2018. Bloomberg also has a charitable organization, Bloomberg Philanthropies, focused on five issues: public health, the environment, education, government innovation, and arts and culture. He’s donated billions of dollars over the course of his lifetime to these and other causes.

As NYC mayor, he supported the NY Police Department's “stop-and-frisk” policy. African-American and Hispanic men were disproportionately targeted under the policy, which allowed police to stop and search people they believed were suspicious. A federal judge eventually ruled that the policy was unconstitutional. And in November of last year, Bloomberg publicly apologized for supporting it.

Also, his comments and behavior toward women. Since he joined the race, Bloomberg’s history of crude comments about women and the LGBTQ+ community have resurfaced. His campaign says that he now realizes they were “disrespectful and wrong.” In a debate, Bloomberg said that some women just “didn’t like a joke” he told. He’s also signed NDAs with an untold number of female employees. After pressure from other candidates, Bloomberg said he’ll allow three women to be released from their NDAs if they request it.

Bloomberg’s also one of three billionaires in the race (hi, President Trump and Tom Steyer) at a time when the progressive wing of the Democratic Party has been speaking out against wealth inequality and in favor of taxing the rich. Bloomberg’s campaign says he isn’t accepting donations – and says that if he’s elected, Bloomberg won’t accept a paycheck. But Bloomberg’s also facing accusations of “buying” his way into the race, dropping hundreds of millions of dollars into things like digital, radio, and TV ads as well as hiring field staff and campaign organizers at a higher rate than his opponents.

Addressing climate change. Bloomberg said that if he were president he would “immediately” move to rejoin the 2015 Paris climate agreement, invest in clean energy, and cut carbon pollution in half by 2030. Throughout his career, he’s also been laser-focused on gun safety, co-founding Mayors Against Illegal Guns in 2006 and ultimately helping launch Everytown for Gun Safety, which has helped pass and advocate for gun safety laws in 20 states. He’s also been clear about his intentions in entering this race: he’ll spend as much as possible to defeat Trump.

On climate change...before he got into the race, he announced a campaign called Beyond Carbon. He’s investing $500 million of his own money to help the US achieve a 100% clean energy economy. Some of Beyond Carbon’s goals: get all coal power plants closed by 2030 and help get candidates who are “climate champions” elected to local offices.

On the economy…he says he’d raise minimum wage to $15/hr and would raise taxes on "wealthy people like him." But he’s against the wealth tax proposed by Sen. Elizabeth Warren (D-MA)

On education…he supported charter schools as NYC mayor and once donated $1.8 billion to his alma mater to support financial aid for students – the largest ever individual donation to a university.

On guns…a top issue for Bloomberg. He’s the primary funder of Everytown for Gun Safety, an advocacy group working to end gun violence. He supports universal background checks and an assault weapons ban. But he’s not a fan of mandatory buyback programs, which he thinks are impossible to enforce.

On health care…he’s not into the idea of Medicare for All. He thinks that replacing the entire US health care system would “bankrupt us for a very long time.” But he’s open to an option that would provide health insurance to anyone who’s uncovered. Also, as mayor, he implemented a number of public health measures, including making NYC the first city to require calorie counts on menus for chain restaurants.

On immigration…he says the country needs immigrants to fill all the jobs out there. He also founded a pro-immigration advocacy group that pushes lawmakers to enact legislation to protect Dreamers. As mayor, he started programs to help immigrant entrepreneurs start and grow businesses, and enforced a policy still in place today that keeps immigration statuses confidential when immigrants interact with the city government (in certain situations, city agencies can’t ask about immigration status).

On national security…he supports sanctions against Russia as a response to things like the annexation of Crimea. He now supports the Iran nuclear deal, though in 2015 he said he had "deep reservations" about it.

On social justice...he championed the NYPD's "stop-and-frisk" policy, allowing police to stop and search people they believed were suspicious. The policy disproportionately targeted black and Hispanic men, and he’s since apologized for it. He supports decriminalizing marijuana and letting states decide whether to legalize it. And he has a record of support for gay marriage.

Bloomberg initially ruled out a 2020 run but changed his mind because he didn’t think any of the other Dem candidates could defeat Trump. Now Bloomberg is using his greatest asset – money – to pose a challenge to the other moderates in the Democratic primary race.