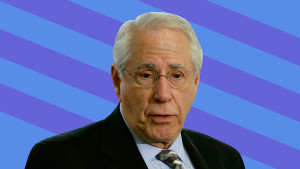 Age is just a number. Speaking of, say hi to former Sen. Mike Gravel (D-AK) – the oldest candidate in the race. (If elected, he'd be 90 by the time he takes office.) But don’t worry, he’s got all sorts of age groups covered: teenagers are running his campaign.

He served as an Alaska senator from 1969 to 1981. In 2008, he ran a failed presidential bid that included a bizarre, viral campaign ad. Seriously, just watch this.

That his campaign is hanging on by a thread. Initially, he was running just to get his issues on the debate stage. But he didn't make it that far, at least for the first of the Democratic primary debates. He’s since had a change of heart because his advisers (cough, still the same teens we mentioned, cough) reportedly told him it "would help our efforts if you really said you're going to run for president." He said he would run for president, but only if he gets to WFH until he can WFWH (work from White House).

On foreign policy...his key talking point is bringing down imperialism. As in, he’s anti-war and thinks the US is too interventionist abroad. He wants to end sanctions against Iran and stop US support for Saudi Arabia. When he entered the 2020 race, he said his goal wasn’t to win but to bring his anti-imperialist talking points to the debate stage. But he’s since said that he’s “in it to win it.”

On political reforms...he’s all about direct democracy. As in citizens, not just elected reps, should vote on laws. He thinks it’s time to abolish the electoral college.

On climate change…he’s all for the Green New Deal, a plan to reduce greenhouse gas emissions, create jobs in clean energy, and move the US to 100% renewable energy sources for electricity within 10 years. He also wants to get rid of all single-use plastics in the country.

On immigration…he wants open borders for everyone except for criminals attempting to escape the law. He also wants to abolish ICE and give undocumented immigrants legal status ASAP, as long as they’ve been in the country for more than three years.

On education…he supports getting free pre-K by sending funding for it to states. He wants to make all public universities and grad schools tuition-free and forgive all government-held student debt, but just this once (hint: one-time bailout). He also wants to (consciously) uncouple property taxes from education funding – that way, all students around the country get an equal amount of funding.

On health care...he wants universal health care. And thinks Medicare for All could be a good way to transition to that.

Gravel lost the race in 2008. But since then, the Democratic party has scooched closer to the left, where he stands. And if you thought age was holding him back, it’s worth remembering that the breakout star of the 2016 Democratic party primaries was Sen. Bernie Sanders (I-VT), who was close to his mid-70s then. Gravel is hoping that despite the odds, he'll be the breakout star this time around.