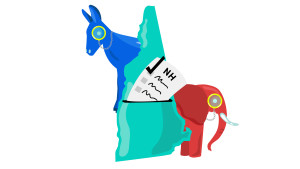 Yep. Caucuses are a much more involved process but both serve the same purpose: to choose presidential nominees. On February 3, the Iowa caucuses kicked off the presidential election season. Voters showed up at more than 1,600 precincts to advocate for their preferred nominee. Then things went south. The Iowa Democratic Party said it experienced a coding issue with an app being used to report the caucus results. The results were delayed while the party double checked all the votes. Even then, we still only have a partial picture.

So far, former Mayor Pete Buttigieg is in the lead, with Sens. Bernie Sanders (I-VT) and Elizabeth Warren (D-MA) in second and third place.

So what’s New Hampshire going to do?

The question of the hour. The state tends to have an independent, unpredictable streak. It lets undeclared voters choose either a Democratic or Republican ballot when they go to vote, adding a sense of suspense to primary election results. The state tends to go rogue when choosing both parties’ frontrunners, picking a different candidate than Iowa (see: in 2008, New Hampshire went with Hillary Clinton and John McCain over Iowa’s top picks of former President Barack Obama and Mike Huckabee).

Got it. Remind me again why New Hampshire matters?

Essentially, because it’s one of the first states to vote in a presidential election. Both Iowa and New Hampshire aren’t especially populous and have fewer delegates to give out than many other states. But as smaller states, they have a reputation for emphasizing grassroots campaigning. Aka candidates who show up in person and woo voters with meet-and-greets and town halls are typically rewarded on voting day. All of that means that like Iowa, New Hampshire tends to set the bar for the candidates to beat, giving early front-runners momentum that can help carry them through more primaries. But there’s controversy.

Data shows that New Hampshire is richer, older, and whiter than most of the US, and even less diverse than Iowa. Both states face criticism for their power to shape the election.

Iowa’s Democratic caucus was a certified mess. And it’s putting even more of a spotlight on the disproportionate influence of Iowa and other early voting states – like New Hampshire – on the trajectory of the election cycle. For now the process isn’t going anywhere...but some are starting to call foul.