November Democratic Primary Debate: What to Watch For 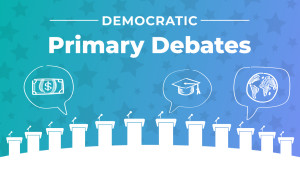 The next round of the Democratic presidential debates are here.

Yep. This one’s lucky number five. Ten candidates have qualified and are trying to win your support to become the Democratic nominee.

It’s going down in Atlanta at the new Tyler Perry Studios (yep, that Tyler Perry). MSNBC and The Washington Post are hosting. You can stream live on Nov. 20, starting at 9pm ET at MSNBC.com and WashingtonPost.com.

How’s this one different from the previous debates?

This one’s only two hours—the shortest yet. Plus, this time around the moderating panel is all women. MSNBC anchors Rachel Maddow and Andrea Mitchell will be there, along with NBC News’ White House Correspondent, Kristen Welker, and The Washington Post’s White House reporter Ashley Parker.

NBC is a little messy right now, isn’t it?

You could say that. Last month, Ronan Farrow released his book “Catch and Kill” that ramped up scrutiny on the network for its handling of sexual misconduct allegations. Farrow’s reporting has put NBC on the offensive and has caused its own employees (think: Rachel Maddow) to call out her own network for the alleged mishandling.

And this relates to the debate how?

Maddow is hosting so there’s that. Plus, last month, a women’s advocacy group called on the DNC to cancel its debate with MSNBC citing its lack of clear support of sexual abuse survivors. TBD if issues like workplace harassment, equal pay, or #MeToo will be discussed on the stage. But yep, tensions at the network are high.

Behind-the-scenes drama? Check. Who will be there for on-the-stage drama?

Last debate, a dozen candidates battled over impeachment and Turkey. This time around, the field has narrowed with 10 candidates qualifying:

To make it on the stage this time, candidates had to hit national polling thresholds and have strong grassroots fundraising numbers. The big name not on the RSVP list this time around? Former Housing and Urban Development Secretary Julián Castro.

So 10 people, talking at each other, for two hours.

Yep. It’s being broken down into four parts with three commercial breaks. There’s no opening statements, and candidates get 1 min and 15 seconds for closing arguments.

Ok, what else should I know?

Starts with a “p” and ends with “olls”.  You’re going to be hearing a lot about them in the upcoming months and they’re top of mind for all the candidates. Here’s your breakdown:

Trump v. Everyone Else:

[Related: We surveyed millennial women one year out from the election. Here’s how they feel about the election, the candidates, and big issues like healthcare, and immigration.]

Say it with us: I-O-W-A. The caucuses are kicking off in February and are top of mind for the remaining candidates and their campaigns. The pollsters are hard at work getting a pulse check on the country and voters are starting to figure out who they’re giving their golden ticket to ahead of the primaries. It’s crunch time. Expect more talking over each other, a narrowing field, and full speed ahead from here on out.