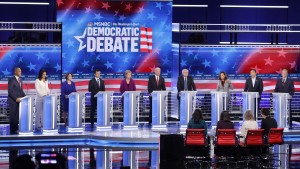 Correct. Yesterday was the fifth Democratic primary debate. The top 10 candidates made the cutoff. And this time, all the moderators were women. In the backdrop of all the DC drama, Dems were pretty low-key. Here's what they talked about:

Impeachment…Former VP Joe Biden says he's learned from all of this that President Trump doesn't want him to be the nominee. But he didn't face questions about his son being a major topic of an impeachment inquiry.

Climate change...an issue that could impact humans for decades had mere minutes on stage. But here's what we learned: billionaire activist and donor Tom Steyer is the new Jay Inslee. And Sen. Bernie Sanders (I-VT) is open to prosecuting the fossil fuel industry.

Abortion...Sen. Elizabeth Warren (D-MA) pointed out the economic disparities of abortion access. Sanders would like to point out that he's an ally.

Klobuchar shouted out Stacey Abrams, Nancy Pelosi, and ex-boyfriends. Buttigieg doesn't even golf. Harris would like Biden to know that she's in the Senate. Yang dedicates this one to all the parents. And misses his friend.