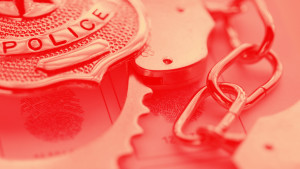 More than 600 people have reportedly been shot and killed by police so far this year.

There is a legacy of distrust between law enforcement and communities of color in the US. Now that people have a smartphone and social media, recordings of altercations between Americans and police have been shared and viewed at a rate never seen before. Over the last few years, cases of minorities being killed by police officers have raised awareness of police brutality – and given rise to the Black Lives Matter movement.

Walk me through that.

– a black, unarmed 17-year-old – was shot and killed by neighborhood watch volunteer George Zimmerman. Zimmerman wasn’t charged until weeks later, and in 2013 was found

of second-degree murder and manslaughter. There were

ended with the words

died after a police officer put him into a chokehold. Then

– an unarmed black 18-year-old – was shot and killed by white police officer Darren Wilson after an altercation. There were more protests. People holding signs and wearing shirts reading “black lives matter” gave the phrase name recognition. Since then, people like

, and many more have become household names for similarly tragic reasons.

Amid all of the tension surrounding this issue, people have killed police officers in New York City,

, and around the country. This has led some to organize in support of police officers under the name

die every year in the line of duty. And then there’s

This phrase became more popular after the Ferguson, MO protests over Brown's death. Some people note that police have killed hundreds of white people, too. And believe the focus on race is divisive and counterproductive.

Welcome to a long overdue conversation about race. Throughout US history, black lives have been treated differently. That’s led to systemic inequalities white Americans don’t have to live with. Now, we need to reform how police officers are

and make sure our judicial system

for what they do in the line of duty.

A lot of us think the Black Lives Matter movement is divisive and at times violent. Many of us think we need to address the underlying problems – like the violent crimes police are protecting us from.

can also take action to

or try to hold them

People have a lot of opinions on what the police can do to reduce unnecessary deaths. A lot of those changes can happen on the local and state level.