The GOP Convention and Democratic Convention: What to Expect 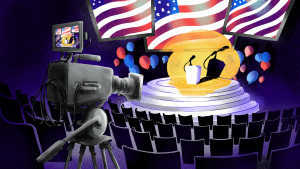 Conventions are going to look a little different this year. Read on listen here.

Because we’re in a pandemic?

Correct. To set the scene, here’s how it went in 2016: an estimated 50,000 people showed up at both the Democratic and Republican conventions. Millions more watched speeches on TV. The conventions are a big deal, allowing each party the opportunity to formally nominate their presidential candidates, present their political platforms, and make a big, public pitch to Americans on why they should vote blue or red in November.

A lot of it is moving online. On Aug 24, Republicans are on track to kick off their convention in Charlotte, North Carolina. After initially pushing for a large in-person gathering (and changing venues to pull it off), President Trump backed off that plan. The event will be mostly virtual, though delegates will meet in some capacity in Charlotte. Meanwhile, Democrats are planning an almost entirely virtual convention. Expect live broadcasts every night plus “curated content” from the original host site Milwaukee, WI and other cities – whatever that means. But delegates are encouraged to stay home and vote online, and presumptive nominee Joe Biden will accept his nomination from his home state of Delaware.

Yup. The people who rep their state at the conventions. They cast the votes that decide a party’s presidential nominee. When you vote in a primary or caucus, those results determine how many delegates each state awards to one nominee or another. There are two main types: pledged (who have to support the candidate they were given during the primary or caucus) and unpledged or super (who can support any candidate). At this point, the vote is expected to be a formality, since Trump and  Biden have secured more than enough delegates to be nominated.

Got it. What happens at the conventions?

Speeches...a lot of them. Plus, the parties will unveil their political platforms. The GOP is planning to keep its platform from 2016. The platform caters in particular to evangelical voters, including a strict definition of marriage as between a man and a woman and an implicit endorsement of conversion therapy for LGBTQ+ Americans. Dems will be presenting a new platform, an early draft of which endorses the idea of universal health care (but not necessarily Medicare for All). It also calls for making US power plants carbon neutral by 2035, among other priorities.

What else should I look out for?

The acceptance speeches by Biden and Trump. Those will come on August 20 and August 27, respectively – and are likely to be livestreamed on every major news channel. Plus Biden's VP pick – who he's promised will be a woman – will get a national introduction. You may also want to keep an eye out for speeches from up-and-coming stars in both parties. See: 2004, when then-Senate candidate Barack Obama (D-IL) gave a rousing speech for then-Democratic nominee John Kerry, putting him in the national spotlight.

Conventions are major events for political parties – both to help them regroup on their platforms and network, but also to sell themselves to the American public in the lead-up to the election. They will look very different this year – and the way both parties pull off these events during a pandemic could impact their chances to attract voters come November.