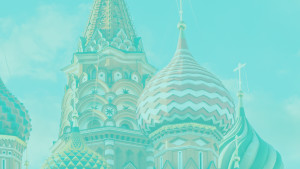 You've been hearing a lot about Russia. And the Trump campaign. And the 2016 US election.

Last year, the US intelligence community raised its hand and said Russia interfered in the 2016 election. Think: a state-sponsored campaign including fake social media accounts, organizing rallies, and buying

meant to rile up millions of Americans and pit them against each other. And the intelligence community says Russia did this in part to

. All signs point to it trying to

. Many people don’t know whether to

or what they see online – and that’s a big problem.

How do we know all this again?

Back in 2016, hackers leaked emails from Democratic National Committee servers.

to have been behind it. Days after the emails leaked, the FBI opened an investigation. Last year, the investigation hit turbo speed after President Trump

FBI Director James Comey. He was leading the investigation – and looking into whether the Trump campaign colluded with Russia. Trump later said he had "this Russia thing" on the mind at the time he fired Comey – raising questions as to whether Trump obstructed justice. Questions that

Mueller was one of the FBI's longest serving directors, and worked with presidents from both parties. So far, the investigation has led to more than

for more than 30 people – many of whom are Russians. The first trial to come out of the Mueller investigation wasn’t about Russian meddling or campaign collusion. It was about tax fraud allegedly committed years ago by Trump’s former campaign manager Paul Manafort. Last month, Manafort was

There is plenty of evidence of wrongdoing by the Trump campaign. Mueller’s investigation has been fair, and we need legislation to protect him from being fired by the president.

We’re torn. Some of us think Mueller’s

job should be protected

by law. But a lot of us think the investigation shows that the Justice Department has turned political, and is bent on

Trump and his presidency.

has a lot of power here. And can do a bunch – about both Russia and Mueller’s Trump-Russia investigation. Last year, Congress passed a bill to

for its activities, including attacking the 2016 US election. When it comes to the Trump-Russia investigation, Congress has also been muell-ing over legislation that would give the special counsel some

There are a lot of questions that remain unanswered. And likely won’t be until well after this election has come and gone.