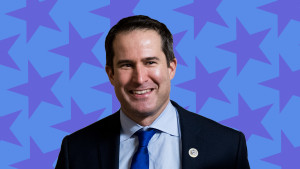 He’s a Harvard-educated former Marine who served four tours of duty in Iraq. He was a managing director of Texas Central Railway, a transportation firm. He’s been a congressman since 2015.

If you don’t recognize his name, it’s not just you: he’s not very well-known on the national level compared to other candidates. Also, he didn't even make the cut to be on the first debate stage. But he did make headlines during the 2018 midterms when he led the campaign for a different Speaker of the House than Rep. Nancy Pelosi (D-CA). That one got him some pushback.

On veteran affairs…he’s on the House Armed Services Committee, has helped recruit veterans to run for Congress, and has sponsored legislation to help improve their access to health care. He also wants to start a program that awards scholarships to young Americans who enlist in a national service program (think: AmeriCorps).

On foreign policy…his military background will play a big role. His vision includes fixing relationships with allies like NATO countries and focusing on improving weapons tech with AI.

On guns…he supports universal background checks. And thinks it’s on Congress to take "weapons of war" away from civilians.

On climate change…earlier this year, he was one of the lawmakers who signed on as a co-sponsor of the Green New Deal. Since then, he said that he signed on “when it was an open framework” and that the bill should evolve into a jobs package that also fights climate change.

On health care…he says it’s a human right. He doesn’t support Medicare for All, instead supports the Affordable Care Act and thinks Congress should focus on improving it. As a vet, he gets his insurance from the Department of Veteran Affairs and he’s pointed out that the VA’s single-payer health care model needs to be fixed ASAP.

Moulton appeals to young voters and military veterans. But his campaign is yet to catch on across the US. If his bid to become the Dem candidate fails, he’s going to have to deal with a primary race back home in Massachusetts.