Super Tuesday: What It Means for the Candidates 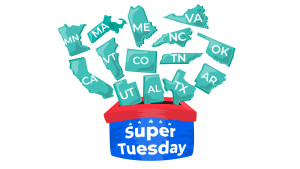 Correct. For decades, a bunch of states (the number has fluctuated) have held their presidential primaries on the same day, known as Super Tuesday. The move means power in numbers: it allows those states to have more influence on the trajectory of the presidential nominations than they would holding a one-off primary or caucus. This year, Super Tuesday goes down on March 3. That’s when more than a dozen states will hit the polls. The thing that puts the Super in Tuesday? The delegate count. These contests account for about a third of all the delegates up for grabs in the Democratic race.

So if I’m running for prez, what’s my strategy?

Well the biggest prizes are California and Texas – the states with the most delegates on the market. So that’s where you’ll want to win big if you want a shot at the presidency. President Trump isn’t expected to have much trouble sweeping the GOP delegates in any of the contests. But there’s a lot at stake for the eight Dems still running. Here’s what people are watching for:

The front-runner...as in Sen. Bernie Sanders (I-VT). He has the most Dem delegates so far. And of the remaining candidates, he had the best showing in the first three races (Iowa, New Hampshire, and Nevada). But he took a hit in South Carolina. That's thanks to....

The comeback kid...aka former VP Joe Biden. He had a disappointing showing in the first three races. Then won big in South Carolina, with a 30-point lead. He's hoping to keep up the momentum on a national level. But it's not just Sanders he's up against. There's also...

The big spender...aka former NYC Mayor Mike Bloomberg. He missed getting on the ballots in several early states and wasn't at most debates because he isn’t accepting donations (a criteria that, until recently, candidates needed to qualify for the stage). But he’s been keeping busy in Super Tuesday states, reportedly spending more than $100 million on ads, hiring campaign staff, and opening more than a dozen field offices. As another moderate in the race, some analysts say he could split the moderate vote and open the door for Sanders to walk away with the big delegate energy.

The resilient ones...like Sen. Elizabeth Warren (D-MA). She got third place in Iowa...and hasn't earned delegates since. Meanwhile, Rep. Tulsi Gabbard (D-HI) has yet to earn delegates at all. But she hasn't indicated she's ready to drop out just yet.

Doing well on Super Tuesday is crucial for candidates to show that their campaigns are viable, and that they have a realistic path to the nomination. For Trump, today’s expected to be easy. But every single Dem has something to prove.