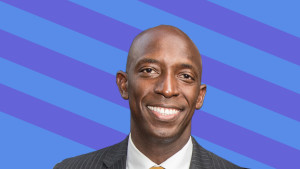 Editor's note: Wayne Messam dropped out of the presidential race on Nov. 20, 2019.

Meet Wayne Messam . He wants you to vote for him for president in 2020.

Since 2015, Messam’s been the mayor of Miramar, FL. He became the city’s first black mayor after unseating a 16-year incumbent. He also owns a construction company with his wife.

Messam’s pretty unknown outside of his state. But that’s something he thinks could help him: he says the presidency needs someone with “fresh eyes” and who’s more tuned in to Americans’ everyday issues. With that, it’s pretty rare for local politicians to become president – and there’s already one in the 2020 race who’s making more headlines than Messam (hi, Mayor Pete). Messam’s also seriously struggling with fundraising, which is part of the reason why you haven’t seen him at any debate yet. Plus there’s this hiccup: the state’s elections commission is investigating him over an inaccurate campaign report from his 2015 mayoral bid.

On guns…one of his top White House priorities is to prevent mass shootings. He’s got a track record on gun control too: he and other FL mayors sued former Gov. Rick Scott (R) over a law that penalizes local officials for enacting gun regulations in their cities.

On education…he wants a one-time gov bailout for people with student loans by canceling all federal and private loans. How exactly would the gov pay for that? Messam wants to repeal the Republican tax plan, which he says would lead to a surplus that could go toward eliminating the $1.5 trillion in student debt.

On climate change…he likes the idea of the Green New Deal but wants to come up with his own plan. He was also against Trump’s decision to withdraw from the Paris climate deal. As mayor, he’s fought back against oil drilling in local spots like the Everglades. Bonus: his construction business focuses on energy-efficient projects.

On women’s health…his stance is plain and simple: he trusts women “to make their own decisions when it comes to their health. Period.”

On immigration…his parents are Jamaican immigrants, so this issue is personal for him. He’s worked to make Miramar a safe zone for undocumented immigrants and wants to create a pathway for citizenship for Dreamers.

While Messam’s gotten some attention for his progressive ideas, he’s having a hard time breaking through in a (very) crowded Dem field. So don’t be too surprised if he doesn’t clinch the Dem ticket.