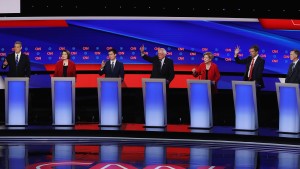 Last night, Americans were glued to the TV, rooting for their favorites.

So which ones showed up last night?

Warren and Sanders...plus eight others. 20 candidates qualified for the second round of debates (which, like last time, are split up into two nights). But the rules are about to get tougher for the third debate in September, so enjoy the large groups while we have 'em.

K, get to the good stuff. What happened last night?

A couple of big moments. Let's talk about the standouts...

The big faceoff...progressives v moderates. Some expected the debate to be a Sanders v Warren faceoff – but the two refused to play. Instead, moderates like former Maryland Rep. John Delaney, Gov. Steve Bullock (D-MT), and former Colorado Gov. John Hickenlooper teamed up to suggest progressives like Sanders and Warren are too extreme to be electable. Topics that divided people: whether to decriminalize the border, whether the Green New Deal was realistic, and what to do about health care. On that note…

Hot topic alert...health care. Candidates spent a lot of time arguing about whether Medicare for All – aka government-run health insurance for all Americans – is a viable option. Some think it's necessary, while others like the idea of a public option (where people could opt in to gov insurance or stick to private). Warren skirted around whether the middle class would have to pay more in taxes for Medicare for All. On the topic, Sanders drove a lot of the conversation since he "wrote the damn bill." He also wants to remind you that Medicare turned 54 yesterday. Send birthday gifts to Capitol Hill.

Allow me to reintroduce myself...my name is Marianne. Self-help guru Marianne Williamson had her practice debate run back in June, but stepped it up last night. She spoke out fiercely against what happened in Flint, acknowledging that a crisis like that wouldn't have happened in an affluent community. And that it will continue to happen if we don't address the underlying cause: racial and economic disparity. She pushed back against characterizations that reparations are "financial assistance," instead calling them a "debt that is owed." And came with receipts to back up how she got to her estimate for them.

Don't forget us...aka everyone else on the stage. South Bend, IN Mayor Pete Buttigieg (D) wants constitutional reform, brought up the problem of gun violence in his community, and put into context how long the war in Afghanistan has gone on. Delaney got more screen time than he was probably expecting. Sen. Amy Klobuchar (D-MN) was peak pragmatist, saying ideas like Medicare for All and free college probably won't work in reality. Rep. Tim Ryan (D-OH) is accepting job applications for chief manufacturing officer. Former Texas Rep. Beto O'Rourke reminded everyone of his Senate loss by calling Texas a "battleground state." Bullock (aka the new guy at the debate) wants to crack down on the influence of money in politics. And Hickenlooper was just grateful to be there.

And we're doing another round of this tonight?

Yep. 10 more candidates take the stage in Detroit. Expect candidates to pile on Biden. He says he'll be ready for the fight this time.

Not sure, he hasn't tweeted about it. That could be because he's busy thinking about California. Yesterday, the state's governor signed a bill that requires all presidential candidates to release their tax returns...or they won't be on the primary ballot in March. You can guess who the bill may or may not be targeting. Bet Bill Weld (R) isn't mad about it.

Last night's debate was a clear example of what the Democratic Party's shift to the left looks like in reality. Progressives are trying to make sweeping changes to health care and education. Moderates are trying to win over Trump voters and put more money in the hands of the middle class. Over the next few months, we'll see what Democratic ideals come out on top. Now...let's do this all over again tonight.

What's trying to convince you everything is fine now…

China. Yesterday, the country said it has released most of the Uighurs and other ethnic-minority Muslims that were being kept in "re-education" camps. This is all happening in China's Xinjiang region, where years ago, a series of deadly attacks were blamed on Uighur separatists. Since then, it's come out that China is holding a million or more Muslims in camps. At first China denied these camps exist. Then it said they're voluntary programs designed to teach Muslims job skills and stamp out extremism. Now, amid international outcry, China says 'don't worry' and that it's released most of its "students"...but experts are saying 'where's the evidence?' And families of those supposedly released are saying their family members are still missing.

What's on some senators' to-do lists...

Protecting athletes. Yesterday, senators intro'd a bipartisan bill to better hold the US Olympic Committee and national sports governing bodies accountable for things like sexual abuse against athletes. This came after a congressional report found that Olympic organizations "knowingly concealed" abuse by Larry Nassar. If lawmakers pass the bill, it may not take effect until after the 2020 Olympics in Tokyo.

Snapstreaks. Yesterday, Sen. Josh Hawley (R-MO) intro'd a bill to ban the Snapchat feature and others to help make social media less addictive. Another theory: someone hasn't been returning his Snaps and the senator is having exactly none of it.

Jill Ellis. The head coach of the US women's national soccer team is saying goodbye to the ladies and stepping down. This comes weeks after she led the team to win the Women's World Cup in France. Fun fact: she's the first coach to ever win two Women's World Cups. And she's leaving the job with 102 wins under her belt...and only seven losses (what, like it's hard?). She said coaching the women was "the honor of a lifetime.

When you hear about the baby boom at a Kansas City hospital...