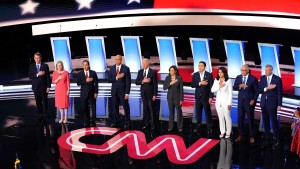 Well, the second Democratic primary debate is in the books.

You know, I was hoping to read more this summer.

Appreciate you. Anyway, over the last two days, 20 candidates took to the stage to try to do what their Facebook ads couldn’t: win your support. If night one was all about ideology (think: progressives v moderates), last night’s attacks got more personal. Here are some moments that stood out…

Roast of Joe Biden…Everyone expected a rematch between former VP Joe Biden (D) and Sen. Kamala Harris (D-CA), and they weren’t disappointed. But Harris wasn’t the only one who took a swipe. NYC Mayor Bill de Blasio (D) pressed Biden on his role in the Obama admin, when deportations were at a record high. Julián Castro (D), who worked with Biden as HUD Secretary, said “one of us has learned the lessons of the past and one of us hasn’t.” Sen. Kirsten Gillibrand (D-NY) pushed for clarity on an op-ed he once wrote about women working outside the home. Biden kept playing by the rules and stuck to his time. But he wasn’t the only one taking heat…

Roast of Kamala Harris…Rep. Tulsi Gabbard (D-HI) hit Harris where it hurts: her controversial record on criminal justice. And a lot of candidates had a problem with her health care plan, which she rolled out earlier this week. Biden criticized it for being too expensive, while Sen. Michael Bennet (D-CO) said it bans employer-backed insurance. Speaking of…

We’ll take health care for $500…aka the biggest issue during both debate nights. And it’s tearing the candidates apart. What they agree on: health care is a right, not a privilege. What they don’t: how to make sure everyone’s insured. There’s Sen. Bernie Sanders’ (I-VT) Medicare for All plan – which gives all Americans gov-backed insurance. There’s Harris’s plan, which is her own version of Medicare for All that doesn’t eliminate private insurers. There’s Biden’s love affair with Obamacare, which he thinks we should keep building off of. Like we said, lots of opinions.

Everyone had their time in the spotlight…Gabbard spoke personally about foreign wars. Gov. Jay Inslee (D-WA) called time’s up on climate change. Gillibrand gave a lesson on privilege. Harris had zero time for corporations that don’t pay women equally. De Blasio wants to tax “the hell out of the wealthy.” Bennet wants a health care plan that won’t hurt the middle class. Castro dropped a “Moscow Mitch” reference. Andrew Yang knows you know him as the guy who a) won’t wear ties and b) wants to give everyone $1,000. Biden asked Harris to go easy on him. The internet didn’t. And Booker knows when “you’re dipping into the Kool-Aid and you don’t even know the flavor.” But don’t worry, everyone knows how to “walk and chew gum.”

The elephant in the room…President Trump. Castro and Inslee called him a “racist” and “white nationalist.” Harris called him a “predator.” Castro said if Dems don’t impeach him now for obstruction of justice, Trump will use it as proof of his innocence in the future. And de Blasio wants everyone to chill and thinks the best impeachment tactic is a win in 2020.

Let’s hear from the crowd…Protesters in the audience called out de Blasio for not firing Daniel Pantaleo – the police officer who put Eric Garner in a fatal chokehold five years ago. And interrupted Biden to bring up the large number of deportations under the Obama admin.

This has been fun, but I could use a break.

So could the candidates. Everyone gets some R&R before the third Democratic primary debate in September. But don’t expect to see as many people on the stage – the Democratic National Committee is cracking down on the qualifications. Specifically, they’ll need more donors and support in the polls. Meaning: the meet and greet period is over.

Biden has been the frontrunner in this race. Which means every time he shows up, other candidates stand to score points if they successfully take him on. It may serve individual candidates to take hits on each other for screen time right now, but it’s still unclear if that will serve the Democratic cause in 2020.

What’s saying ‘let’s take it down a notch’…

The Federal Reserve. Yesterday, it cut interest rates for the first time since the 2008 financial crisis. There’s confusion as to why this is happening now since the economy has been looking good (see: record low unemployment). But the Fed says ‘we think this rate cut could keep that going.’ And hopes it’ll protect the economy from potentially harmful effects of the US’s trade tensions and economic slowdowns elsewhere (think: China, Europe).

Skimm This: Listen to our latest podcast ep to learn more about how you may be impacted by the rate cuts.

Sudan. Yesterday, authorities apparently closed schools indefinitely in the central city of El-Obeid. Earlier this week, security forces shot and killed six people, including four students, who’d been protesting there against food shortages and living conditions. Now, authorities are cracking down on dissent, closing these schools and issuing a curfew. The UN’s calling for an investigation.

Who thinks he found his replacement…

Ricardo Rosselló. Puerto Rico’s soon-to-be-ex-governor announced who he wants to replace him. Meet, Pedro Pierluisi: Puerto Rico’s former resident commissioner in DC and candidate for governor in 2016. Reminder: Rosselló said he’d resign after the whole Chatgate scandal. But there’ve been problems finding a replacement. The first in line for his job resigned over said scandal, and the second in line said ‘no thanks, I’m good.’ Now, Pierluisi could take over as governor until the end of his term next year…if Puerto Rico’s House and Senate confirm him.

When your co-worker reminds you that yesterday was payday…