Shootings in the US, Protests in Moscow, and 'Number Neighbors' | Daily Skimm | theSkimm 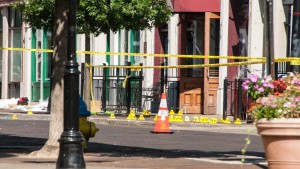 This weekend, there were two mass shootings in the US. About 13 hours apart.

There are no words.

Let’s talk about the first one…

On Saturday, a gunman killed at least 20 people and wounded dozens at a Walmart in El Paso, Texas. It’s the deadliest mass shooting this year and one of the deadliest in US history. The 21-year-old suspect is in custody.

Authorities say the suspect wrote an anti-immigrant manifesto that was posted online minutes before the first calls about the shooting came in. It said the attack was a response to “the Hispanic invasion of Texas.” (Note: El Paso is a majority-Hispanic border city.) The rifle used in the shooting was purchased legally. The suspect was allowed to carry it openly in Texas.

What do authorities have to say?

Federal prosecutors are treating the attack as an act of domestic terrorism. Prosecutors are considering federal hate crime and firearm charges, which could carry the death penalty.

What about the community?

An off-duty soldier is being called a hero after he ran towards the scene to move children out of harm’s way. After the El Paso Police Department tweeted requesting blood donations, people stood in line for hours to help. Texas Gov. Greg Abbott (R) called the mass shooting a “heinous and senseless act of violence.”

And the second one…

Yesterday morning, a gunman killed at least nine people and wounded 27 at a popular entertainment district in Dayton, Ohio. Police officers on patrol in the area responded to the attack, shooting and killing the 24-year-old suspect less than a minute after he opened fire. Ohio Gov. Mike DeWine (R) said he joins “those across Ohio and this country in offering our prayers to victims and their families.”

It’s unclear what the motive was and authorities reportedly haven’t found a manifesto or social media presence. Authorities said there isn’t evidence that the suspect shot people based on racial bias. But said he appeared to be ready to kill more people: He was wearing body armor, had an assault-style rifle, as well as multiple high-capacity magazines.

Any word from lawmakers?

Republicans are pointing to social media, video games, and mental health problems as a cause for these attacks. Democrats are calling for stricter gun laws. Some are calling on Congress to end its August recess immediately to act – specifically for Senate Majority Leader Mitch McConnell (R-KY) to call a vote on two bills, that have already passed in the House, that focus on background checks. Also, some are calling out President Trump for the culture of hatred and white nationalism that he’s encouraged, and have pointed out the language in the suspect’s manifesto aligns with language the president has used at rallies to describe the influx of migrants. Acting White House chief of staff Mick Mulvaney says it’s not fair to lay shootings “at the feet of the president.”

Speaking of, what does the president have to say?

Yesterday, Trump said that “hate has no place in our country” and that this is a “mental illness problem.” He says he’ll speak more on it today.

Gun control has become a political issue in this country. And while there’s a general consensus that something needs to be done to stop the rising number of mass shootings…there’s been very little action. Innocent people keep dying as we wait for change.

Who’s not giving up…

Protesters in Russia. Over the weekend, police detained hundreds of people at a rally calling for fair elections. Moscow’s city council is currently controlled by a pro-Kremlin party. Last month, election authorities blocked some opposition candidates from running in the election that’s scheduled for next month. Can you guess who wasn’t happy about it? A lot of people. Just last week, more than 1,300 people were detained for protesting in the capital. Some of those detained are being charged with organizing mass civil unrest, which can be punished with up to 15 years in jail. Before this weekend’s rally, prosecutors said ‘if you show up, get ready to suffer the consequences.’ They showed up anyway – including one of the opposition candidates barred from running.

Daniel Pantaleo – the New York City police officer accused of killing Eric Garner. On Friday, an administrative judge recommended that Pantaleo be fired. In 2014, the officer was caught on video putting Garner in a chokehold. Garner said he couldn’t breathe and later went into cardiac arrest – he was pronounced dead at a hospital. Garner’s death was one of the events to spark the Black Lives Matter movement. The officer has been on desk duty since Garner’s death. Last month, the Justice Department said it won’t file federal charges against Pantaleo. Now, after this recent recommendation, he’s been suspended without pay for 30 days. The police commissioner gets the final say on whether the officer keeps his job or will have to pack up his desk. The decision is expected later this month.

Who’s glad to be home…

A$AP Rocky. On Friday, the American rapper was released from Swedish prison and later returned to the US. He had been detained in Sweden for around a month over his alleged involvement in a street fight. Last week, he pleaded not guilty and was released after the trial ended. President Trump, who’d been pushing for his release, tweeted “It was a Rocky Week, get home ASAP A$AP!” (See what he did there.) The rapper is waiting for a verdict, which is expected later this month, but it’s unclear if he has to return to Sweden for that. If found guilty, he could face fines and up to two years in prison.

Who doesn’t want to hear from you…