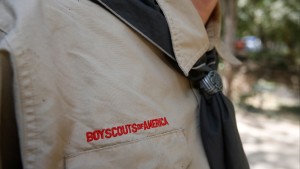 The sexual abuse scandal in the Boy Scouts of America (BSA) may be worse than originally thought.

Start from the beginning.

Earlier this year, it came out that the nonprofit had kept a list that included more than 7,800 scout leaders known or suspected to have sexually abused boys since the 1940s. And that it had identified more than 12,000 victims. That was more than six times the number the BSA told a court back in 2012.

I'm going to need to read those numbers again.

Take your time. To summarize: for decades, the BSA kept files about possible pedophiles. While a large part of those docs have reportedly become public because of lawsuits or investigative reporting, there could be more details that haven't come to light.

Earlier this week, lawyers representing about 800 men who say they were victims of childhood sexual abuse filed a lawsuit. A single plaintiff said he was abused "hundreds" of times by an assistant scoutmaster. As part of the suit, the lawyers claimed to have identified more than 350 alleged perpetrators who aren't included in the BSA's files.

Wow. What does the BSA have to say?

The org apologized for anyone who was harmed as a member. It said "we believe victims, we support them, we pay for counseling" and it encourages them to come forward. It has previously denied it had been hiding the files and argued the list helped keep potentially dangerous adults away from kids.

The BSA is trying to figure out whether to file for bankruptcy because of legal costs around this issue. If that happens, it may temporarily halt existing lawsuits and block new ones.

The BSA is one of the largest youth organizations in the US, with more than 2.4 million young participants and nearly 1 million adult volunteers. As more allegations come out, it's unclear how the victims will get justice or how deep the issue runs within the organization.

Toni Morrison. Earlier this week, the legendary author died at age 88. She was known for her novels like "Song of Solomon," "Beloved," and "Sula." And for giving a powerful voice to and authentic representation of the black experience in America. She won several awards along the way, including the Pulitzer Prize for fiction in 1988, and she became the first African American woman to win the Nobel Prize in Literature in 1993. In 2012, President Obama awarded her the Presidential Medal of Freedom. After she died, he said that it was "a gift to breathe the same air as her." RIP.

Skimm This: Listen to our latest podcast ep for more on Morrison's life and legacy.

What President Trump is up against...

Pushback in El Paso, Texas and Dayton, Ohio. Today, the president is expected to visit the two cities where this past weekend's mass shootings happened. But residents and local politicians are upset with Trump's silence on gun control and his divisive rhetoric. And he could face protests during his visits. Trump has faced criticism for years for inciting violence, using racist rhetoric, and failing to condemn white supremacy in all instances. The criticism has reached a fever pitch in the past few days since the suspect in the El Paso shooting used similar language as the president in his manifesto. Trump says his plan for the visit is to meet with first responders, law enforcement, and victims – and the White House says he wants to figure out how "we keep this from ever happening again."

California. The Trump campaign is suing the state over its new law that requires presidential candidates to release five years of tax returns...or they won't be on March's primary ballot. The bill didn't name Trump, but we'll let you guess who it targets. Now, Trump's campaign is fighting back and calling the law unconstitutional, since it would add another requirement to run for president.

…Oh and speaking of people in Trump's orbit, former FBI agent Peter Strzok is suing the gov over his firing last year, saying it violated his First and Fifth Amendment rights. And US Ambassador to Russia Jon Huntsman is stepping down later this year and leaving the following message to the president: 'keep a close eye on the Kremlin.'

What's concerning people around the world…

A water crisis. A new report says that a quarter of the world's population is living in countries that are using almost all of the water they have. Things like population growth and urbanization are contributing to an increase in demand for water...but supply remains pretty much unchanged. And climate change won't help, since it can cause rainfall to become more unpredictable and warmer temps can lead to more evaporation. Qatar, Israel, and Lebanon are the world's most water-stressed countries.

What's in need of a financial lifeline…

Barneys New York. Yesterday, the luxury department store filed for bankruptcy and said it's closing some of its stores and warehouse locations. This comes as it's been struggling with high rent and weak sales.

Why your friend with the new iPhone is always the photographer…

When Disney unveils its new bundle…