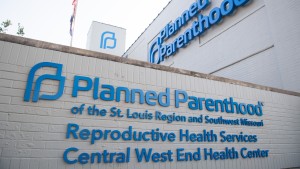 Planned Parenthood is pulling out of Title X.

Title X is a federal program that gives money to family planning clinics that provide services to low-income Americans. It helps about 4 million women around the country get access to things like pregnancy tests and STD screenings. Planned Parenthood serves almost half of those people.

It is. But the Trump admin recently announced some changes to the program. It said organizations that provide abortions or abortion referrals won't get Title X funding. Its reasoning: to create a "clear financial and physical separation" between those orgs and government-funded services.

Let me guess, people had feelings about that…

Yup. Anti-abortion conservatives supported the move, saying they didn't want taxpayer dollars going to those types of clinics. Groups like the American Medical Association have criticized it, saying the changes may harm doctor-patient relationships and deny pregnant women services that are available to them. A number of states and organizations have sued the admin over the changes, but a federal appeals court has ruled that the changes can take effect while lawsuits play out.

Planned Parenthood's leaving the program, saying it was pretty much forced out and it won't "be bullied" into hiding abortion info from its patients. By leaving, it'll lose tens of millions of dollars in Title X funding. Other programs like Medicaid can help continue to fund the org, but this may result in a big change in how it operates.

About 1.5 million women could be impacted by this move and states like Utah and Vermont will be without a Title X provider. Supporters seem to be pleased that President Trump fulfilled a key campaign promise and hope that the changes could open up funding to groups like religious-based organizations. Critics are worried about the fact that the patients are getting caught up in the middle of all this.

What police officers on both coasts are thinking about…

This new law in California. Yesterday, the governor signed one of the country's strictest laws on police use of deadly force. The bill only allows deadly force to be used if the officer believes it's "necessary" and there aren't any other options. If investigators find that officers used lethal force when there was another reasonable option, they could reportedly face things like disciplinary action or criminal charges. The bill comes as a result of deadly police encounters with unarmed black men, including the death of Stephon Clark in 2018. It will take effect in January.

Daniel Pantaleo. Yesterday, the NYC police officer accused of putting Eric Garner in a fatal chokehold in 2014 was fired. Pantaleo had been on desk duty ever since Garner's death. But earlier this month, a police administrative judge said that Pantaleo should be fired for his involvement. Now that he's officially been given the boot, his lawyer says he plans to appeal.

…Oh and AG William Barr removed the acting director of the Federal Bureau of Prisons more than a week after Jeffrey Epstein died by suicide while in federal custody. The DOJ's inspector general and the FBI are still investigating the death.

What's feeling more responsible than you after a green juice...

The Business Roundtable. Yesterday, the group representing the country's most powerful CEOs released a statement redefining "the purpose of a corporation." The old mantra was that shareholders' interests always come first. Now it says companies should also focus on other things like investing in employees and delivering value to customers. What a concept. Some have said making shareholders a priority has contributed to today's economic inequality – which is becoming a big issue ahead of the 2020 election. 181 CEOs signed the statement, including those from Apple, AT&T, and Bank of America. TBD on what the group plans to actually do to implement these changes but in the meantime, the CEOs say they'll give their employees "important benefits" and use more sustainable practices to "protect the environment."

Where people are sweating over their future bank accounts...

Germany. Yesterday, its central bank warned that the country could be slipping into a recession. Part of that is because of a drop in exports due to Brexit and the ongoing US-China trade war. Experts there are saying that a downturn in industrial production could continue into the next few months.

$: What's money got to do with it? Here's how a recession can affect your wallet.

Who's taking a page out of Russia's playbook...

China. Facebook and Twitter say they've removed accounts tied to a Chinese disinformation campaign about pro-democracy protesters in Hong Kong. It's the first time that the companies have found China to be behind this type of operation.

When you decide it's time to part ways with your partner...

Who handed out a very special rock…