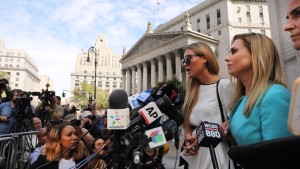 Yesterday, many of Jeffrey Epstein's accusers got the opportunity to speak out in court.

Epstein – a well-connected multimillionaire – was accused of sexually abusing dozens of girls. He could've been hit with federal charges in Florida but he cut a deal in 2008 to serve only 13 months in jail, with permission to leave six days a week.

It was – and still is. Earlier this year, Epstein was hit with new federal sex trafficking charges in New York. But weeks ago, Epstein was found dead in his jail cell by suicide.

What does this mean for the case against him?

The criminal case against Epstein ends with his death. But because of public interest in the case, the judge invited Epstein's accusers to speak in a hearing, which happened yesterday. One by one, 16 women spoke out.

Some talked about the anger they feel. Some called Epstein a "coward," saying his death robbed them of justice. Several asked prosecutors to continue investigating those who might have helped Epstein – specifically his alleged madam Ghislaine Maxwell, who has not been charged and has denied any wrongdoing.

So what are prosecutors going to do?

They say they're still investigating who might have conspired with Epstein. And that more charges could come.

Is there anything else these women can do for justice?

Because of the Child Victims Act, survivors of child sex abuse in New York have until August next year to file lawsuits against institutions and individuals, even if the statute of limitations has expired. Case in point: When the law went into effect earlier this month, a woman who says she was raped by Epstein when she was 15 sued his estate and alleged accomplices (Maxwell and three unnamed women). Others have followed her lead.

The 2008 plea deal fell far short of what many of Epstein's accusers felt he deserved: accountability for his alleged crimes. Now that Epstein is dead, it's not clear what justice may look like moving forward. But yesterday, some of the accusers got to speak out in court, an opportunity they were denied years ago.

Skimm This: Our latest podcast episode goes deeper into what happened during the hearing.

Missouri's abortion law. Earlier this year, the state's Republican governor signed legislation that would've banned most abortions after eight weeks, even for victims of rape or incest. Medical professionals who violate the eight-week cutoff could also face up to 15 years in prison. The law would have been one of the most restrictive in the country, and was supposed to go into effect today. But the ACLU and Planned Parenthood sued, arguing that it violated Supreme Court precedent – which only lets states regulate pregnancies starting around 24 weeks in. Now a federal judge is saying 'agree' – and that the eight-week ban can't go into effect until this case plays out in the courts.

Who's getting legal updates…

Anthony Levandowski. Yesterday, the Justice Dept charged the former engineer for allegedly stealing trade secrets from Google. Levandowski used to work on Google's self-driving cars, but he quit back in 2016, later teaming up with Uber. Surprise, Google caught wind of it and accused Levandowski (and Uber) of stealing its tech. Now the DOJ is backing Google up, accusing Levandowski of stealing around 14,000 confidential files. Levandowski's pleading not guilty. Either way, let this be your reminder to always try to leave your job on good terms. And don't steal – even the pens.

Meek Mill. Yesterday, the rapper pleaded guilty to a years-old gun charge, ending his involvement in the criminal justice system. Back in 2008, Meek – then 19 years old – was convicted on gun and drug charges, spending eight months in prison. A few years ago, he violated probation, sending him back to prison. Many spoke up in Meek's favor. Plot twist: it also came out that the officer who originally testified against him had credibility issues. Last month, Meek's 2008 conviction was overturned. He was granted a new trial but instead went with the plea deal, ending his case without additional prison time. As he said, "I'm extremely grateful that my long legal battle is finally behind me."

The College Board. Yesterday, the organization that brought you the SATs said it was scrapping plans to try adding an "adversity score." The score would've let colleges know about things like the student's family income and nearby crime rates. The goal: give more context for what a student's dealing with beyond the test. But some educators and parents didn't like the idea of trying to quantify a student's circumstances. Now the College Board is saying 'we hear you.'

$: In other college news, student loans are still a thing. We Skimm'd tips to help you pay them off.

While Leslie Jones will no longer be live from New York...

Robert Pattinson and his lob are live from 15th century Europe.