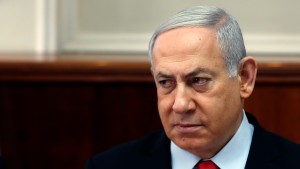 Israel's Prime Minister Benjamin Netanyahu has some legal issues to attend to.

Yesterday, Israel's attorney general charged him in three corruption cases with bribery, fraud, and breach of trust. It's the first time an Israeli PM has been indicted while in office.

The investigation has been ongoing for about three years. In two of the cases, Netanyahu is accused of getting involved with media and telecom companies in exchange for positive news coverage. In the other, he's accused of accepting hundreds of thousands of dollars in gifts (like cigars and champagne) in return for favors.

Probably not. Netanyahu dismissed the allegations as lies and called the indictment an attempted coup. He seems ready to fight this and called on Israelis to "investigate the investigators." The attorney general said nobody is "above the law."

So does he have to step down?

Nope. He could face a trial – and would have to step down if convicted. But there's also the possibility that parliament decides to grant him immunity. In the meantime, he can keep his position. The problem for him: that was already on shaky ground.

In October, he failed to form a government. His rival, Benny Gantz, was then tasked with trying to form one. But he failed too. Now, any member of parliament gets a shot. If after three weeks there's still no coalition, Israel could go back to the polls for the third time in less than a year.

Netanyahu is the longest-serving prime minister in Israel's history. And has stayed popular with his base until now. But some said that being indicted is an entirely different story. Now, he could stand to lose support at a critical point in his political life.

When you're looking forward to the weekend...

The House Intelligence Committee is too. Yesterday was the last day of public hearings for the foreseeable future. Reminder: This is about a phone call between President Trump and Ukraine's president, in which Trump seemingly pressured Ukraine to investigate former VP Joe Biden and his son (while withholding military aid). About a dozen people testified. But most people are still talking about US Ambassador to the EU Gordon Sondland's explosive testimony. Overall, the consensus is that something shady was going on. And some witnesses even believed an attempt at quid pro quo did happen.

...Oh and that's not the only thing Congress has cooking. Over 100 House Dems are calling for Trump to fire senior adviser Stephen Miller – saying he's not fit to lead the admin's immigration policy after past emails documented his "extremist, anti-immigrant ideology."

Psst...here's what impeachment could mean for your wallet.

What's not winning employer of the year…

WeWork. Yesterday, the company announced it's laying off 2,400 employees to cut costs. The company was once considered the most valuable tech startup. But in the last year, it's forced out its co-founder and CEO, scrapped its IPO, was bought by SoftBank, and now this.

When one door closes...

Who'll have you singing 'come on, Barbie, let's go party'...