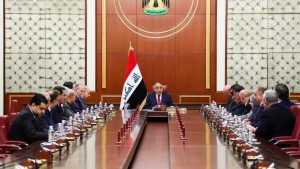 THINGS THAT MAY SEE SOME CHANGES

Let's take a step back.

For months, protesters in Iraq have been clashing with security forces over a variety of issues. That includes high unemployment, poor public services, corruption, and growing Iranian influence in the country. Hundreds of people have been killed in the unrest. On Friday, Prime Minister Adel Abdul-Mahdi announced plans to resign after security forces killed dozens of demonstrators over a 24-hour period. Yesterday, Iraq's parliament approved his resignation.

Some anti-gov protesters have been celebrating. But many Iraqis are worried about the future. The country's constitution doesn't have clear rules on what to do when a prime minister resigns. So for now, Abdul-Mahdi will stay on as "caretaker" until parliament nominates a new PM to form a new gov – a decision that could take time.

The PM's decision to resign is adding uncertainty to a place that's already struggled with years of war. It's also highlighting foreign influence in Iraq, an issue that isn't new to the country.

President Trump wants to get along with the Taliban now.

Maybe. Reminder: for almost a year, the US and the Taliban were talking out ways to end the 18-year war in Afghanistan. Earlier this year, they seemed to agree on the basics: the US would gradually withdraw all remaining 14,000 troops from the country. And in exchange, the Taliban wouldn't let terror groups use Afghanistan as a base to launch attacks abroad. But back in September, the Taliban took responsibility for an attack that killed 11 people – including a US soldier. That's when Trump ended talks with the group and canceled a secret meeting with its leaders.

Got it. What's changed since?

It's unclear. Last week, Trump surprised American troops in Afghanistan on Thanksgiving. He said that he'd reopened peace talks with the Taliban and demanded a cease-fire. The Taliban apparently said they were "ready to talk" and pick up where they left off...but made no mention of a cease-fire.

Talks may be back on. But earlier this year, the US announced it's been pulling out thousands of troops from the area. It was hard enough getting the Taliban to agree to a cease-fire in the past. Now, American negotiators may have less leverage to work with.

SCOTUS. Today, the Supreme Court is set to hear its first major gun case in almost a decade. It's about an NYC rule that prevented gun owners from taking their guns outside the city. Residents and the NRA's local affiliate argue it violated the Second Amendment. NYC says 'this is moot' since the rule's been repealed. A decision is expected next year.

The impeachment inquiry. Here's where we left off pre-food coma: the House Intelligence Committee held two weeks of public hearings into President Trump's dealings with Ukraine. Specifically, whether there was an abuse of power when Trump called for investigations, including into former VP Joe Biden and his son...all while the admin withheld almost $400 million in aid.

London. Over the weekend, a man stabbed and killed two people and injured three others near London Bridge. Many have praised the bystanders, who stopped the attacker before police shot and killed him. The attack is being treated as a terrorist incident. And is sparking questions about the efficacy of Britain's justice system. That's because the attacker had been convicted on terrorism charges back in 2012. He'd been released on parole last year, and was reportedly wearing an ankle bracelet at the time of the attack.

This HIV drug. Last week, a pharmaceutical company announced a new strawberry-flavored HIV drug designed for babies and toddlers. It will cost less than $1 a day. The FDA is still reviewing the drug. But since traditional pills can be hard to swallow, experts think this version could save thousands of lives.