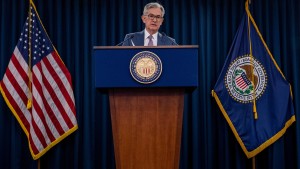 A record number of Americans filed for unemployment benefits...again.

Over 6.6 million last week. That's about double the record number of unemployment claims from the previous week. It means that nearly 10 million people – roughly 6% of America's workforce – are jobless, in large part due to the coronavirus pandemic. But the real number could be higher.

The jump in claims has overwhelmed state unemployment websites and their phone lines, making it difficult for applicants to get through. For reference: this time last year, the weekly total of unemployment claims was just 211,000. With nearly 90% of the US population under stay-at-home orders, a lot of businesses have shut their doors. And those that haven't may be struggling to get by – meaning more people could be laid off or furloughed.

Are we in a recession? Not officially. Reminder: a recession can happen when the economy sees a major, months-long drop in things like GDP and job opportunities. We skimm'd recessions for you here. Some economists say there could be as many as 20 million jobs lost in the coming weeks – more than double those lost during the 2007-2009 Great Recession. And while the US isn't technically in a recession, it may already feel like it for many. The IMF says the global economy is already there.

I thought help was on the way.

It is. The $2.2 trillion stimulus package signed into law last week is meant to help. It's increasing unemployment benefits by $600 per week (up to four months) for those who qualify. And it's made more people eligible (think: Uber drivers, freelancers). As for the $1,200 stimulus checks to most Americans, the IRS says it's sending them out in the next three weeks – reportedly as early as April 9. If you need more info on how to file for unemployment, we explain it here.

Yes, there's another grim record. Yesterday, the number of known COVID-19 infections worldwide topped 1 million. More than 51,000 people have died. With the virus's continued spread throughout Europe, North America, and now Africa, officials are warning of darker days ahead.

The world is going through a lot right now. In the US, the financial impact is historic – and reportedly affects nearly half of working Americans in one way or another. While relief is on its way, it may not be enough for the millions of people who need help, or may need it soon.

Psst...Here's what high unemployment could mean for your income and investments – even if you haven't filed.

Blood donation during a pandemic is more crucial than ever. In recent weeks, the American Red Cross has seen a decrease in tens of thousands of blood donations amid the COVID-19 outbreak.

Yesterday, the FDA said it eased restrictions for gay and bisexual men who want to donate blood. Under the new rule, they should not have sexual contact with other men for three months before donating – instead of the one-year waiting period that was in place before. The FDA had also recommended that women who have had sex with gay or bisexual men wait a year before donating, but that number was reduced to three months as well.

The FDA said the change to its guidelines regarding blood donations "can be modified without compromising the safety of the blood supply." And that the changes are expected to remain after the pandemic ends. LGBTQ+ advocates had called the 12-month waiting period – set up in 2015 to replace a decades-long lifetime ban – discriminatory and "antiquated." Some have applauded the update and called it a victory against discrimination. But plan to continue their efforts to lift the waiting period entirely.

The American Red Cross is still accepting blood donations during the pandemic. You can schedule a donation time here.

Skimm More: We spoke to the president of the American Red Cross about the importance of donating blood during the coronavirus pandemic.

What's saying 'the cheese curds will have to wait'…

The DNC. Yesterday, it postponed its presidential nomination convention about a month, from July 13 to August 17 – a week before the Republican Party's convention. There's no guarantee the coronavirus outbreak will be over by then – but with the change, Democrats can ensure they can use a similar policy as Republicans on whether a convention is safe for thousands of people. Oh, and if you're thinking this may affect the date of the November election, think again: That would require a change to federal law.

Instacart. Yesterday, the grocery delivery service said it's providing free health and safety kits (think: face masks, hand sanitizer, and a thermometer) to its employees. The update came days after workers went on strike – requesting better protections amid the coronavirus pandemic, including PPE and hazard pay. Instacart employees called the changes "a step in the right direction, but still a far cry from adequate."

Amazon. Yesterday, the online marketplace said it will soon start checking employees' temperatures and provide face masks for its US and European staff. This comes after employees in Staten Island decided to strike over Amazon's response to the virus after at least one employee tested positive for COVID-19. The organizer of that strike was fired. Now, in response to the promise of protections, employees are apparently saying 'we'll believe it when we see it.'

...Oh and speaking of Amazon, it's apparently a gamer now.

What'll have you singing "Country roads, take me home"...

Why you may be seeing people sliding on TikTok…

And giving a shoutout to April.