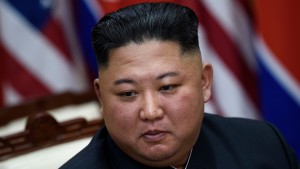 Apparently. There's been speculation about the North Korean leader's whereabouts for weeks. Last month, a report surfaced saying he was in "grave danger" after undergoing a heart procedure. The rumors went as far as saying he died. But on Friday, the North released photos of Kim touring a newly completed factory. While no country was able to independently confirm the photos, President Trump said he was "glad to see" Kim is back.

Why is everyone laser-focused on his health status?

North Korea is a hermit kingdom that's committed serious human rights abuses, is one of only nine countries known to have nuclear weapons, and has no clear line of succession. In other words: the int'l community has a vested interest in knowing who it's dealing with. But even as attention on Kim's health seems to have fizzled out, more drama flared up.

Yesterday, the South's military said North Korea fired at one of its guard posts on the border, and that it returned fire. No one was hurt. And it's unclear why this happened – but it marks the first violent incident between the two since 2017. While the two countries have technically been at war since the 1950-1953 Korean War, they agreed to stop all hostile activities at the border in 2018 – an agreement this shooting may have violated.

Rumors of Kim Jong Un's death had many wondering how the country – and region – would fare without him. But for now, at least, that topic may be on the backburner.

What's pointing the finger at China…

The Department of Homeland Security. An intel report says the Chinese gov "intentionally concealed the severity" of the coronavirus outbreak so it could stock up on and hoard medical supplies. The report points to unusual trade trends in January, like an increase in imports of face masks and surgical gloves and a sharp decrease in exports. It pointed out that all of this happened before China publicly reported the disease as a "contagion." The DHS and China have yet to comment – but the report comes amid heightened pressure on China from the Trump admin.

J.Crew. Today, the New York-based clothing retailer's parent company filed for bankruptcy. It's the first major retailer to unravel amid the coronavirus pandemic, which has forced stores across the country to close due to stay-at-home orders. The company had already been struggling with debt and changing consumer taste (including a surge in online shopping). Now, it's agreed to convert over $1.6 billion of its debt into equity and will be closing stores across the country to reduce costs.

Sudan. The country has officially criminalized female genital mutilation (FGM). The procedure, which nearly nine in 10 women there endure, is linked to short- and long-term health risks, including chronic pain and infections – and sometimes death. Sudan accounts for more than 12 million out of the more than 200 million people living with FGM worldwide. Now, anyone who performs it in Sudan can face three years in prison and a fine – though many are still expected to defy the law.

Former VP Joe Biden. Last week, he spoke publicly for the first time about Tara Reade's sexual assault allegation against him. Since March, Biden has been facing pressure to address his former staffer's claim that the then-senator assaulted her in the '90s. That ratcheted up after at least four people corroborated elements of her story. On Friday, Biden said this "never, never happened." He also called on the National Archives to release any record of a complaint Reade says she made at the time.

Who's not settling for defeat...

The US women's national soccer team. A judge has dismissed the players' claims of unequal pay. Last year, the Women's World Cup champions sued the US Soccer Federation for $67 million, claiming it paid them less than the men's team. But last week, the judge ruled that the women's team didn't have enough evidence since the team earned more – both in total and per-game – than the men from 2015-2019. The women's team plans to appeal. But their claims that they got unequal travel accommodations and medical support are still headed to trial.

Skimm More: Earlier this year, we chatted with members of the US women's national soccer team about their fight for equal pay.