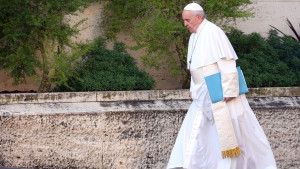 EVERYBODY IN THE CONFERENCE ROOM

Today, more than 100 bishops are in Rome for Pope Francis's summit on protecting children from sex abuse.

A summit, huh. Can't wait to see how this fixes decades of abuse.

You and everyone else. In case you missed it, bombshell stories have come out about child sex abuse in North and South America, Europe, and also Australia – where 7% of priests were accused of abusing children over decades. Last year, Pennsylvania dropped a report that found priests there abused more than 1,000 children. Germany found that close to 3,700 children were abused. And more.

What in the actual f*ck.

Agreed. The issue though is not just about decades of abuse. It's also about the allegations against bishops for covering up this behavior.

So Pope Francis is the champion to fix things?

Honestly, most people say no. He's been called out for taking his sweet time to address the issue. Last year, he dismissed accusations of sex abuse victims in Chile as slander. Then apologized. Since then, reports of sexual abuse and alleged cover-up have kept coming out. And the pressure is on for fundamental change.

So what's his plan?

He's bringing more than 100 bishops and others together to workshop how to prevent and investigate abuse. And how to help survivors. There's also a focus on "prayer and discernment" – which some say isn't enough to end child sex abuse. The pope acknowledged that in today's opening speech.

What I'm hearing is to not get my hopes up.

Yeah pretty much. Since this is the first summit of its kind, there's been hope that it would lead to meaningful change and accountability. But the pope has said to keep expectations "deflated." Last year, with states launching investigations into the church, bishops in the US attempted to create a commission to review complaints against priests. They were told to hold off until this conference. Which is why many – including survivors – are not okay with keeping their expectations for this conference low.

Whatever is accomplished in these next few days, there are a lot of recent stories and allegations that have come to light that likely won't be addressed. Like the environment that the church has created by requiring priests to be celibate and unmarried. And the Vatican's secret rules for Catholic priests who have children. And the issue of some priests and bishops abusing nuns for decades. Let's see how this summit decides to finally start protecting children from sex abuse.

Who you'll be hearing about…

Jussie Smollett. Yesterday, the "Empire" actor was charged with making a false police report (considered disorderly conduct in the state of Illinois.) Last month, Smollett alleged two men approached him, yelled "racial and homophobic slurs," beat him, and wrapped a rope around his neck. At first, authorities were investigating it as a potential hate crime. Then last week, two Nigerian brothers – who both knew Smollett – were arrested and later released without charges. Police said the investigation had "shifted" and there were reports he may have paid the brothers to stage the attack. Yesterday, he was charged with disorderly conduct – which is punishable by one to three years in prison.

Making a statement. Yesterday, the Supreme Court unanimously said there's a limit to states' ability to seize private property after someone gets arrested. Let's start with an example: Tyson Timbs brought this case to the Supremes because a few years ago he pleaded guilty to selling $225 worth of heroin to undercover police officers. He was sentenced to house arrest, probation, $1,200 in fines, and had his $42,000 Land Rover seized. Officials argued the car was used to transport drugs. Up until this point, the Supremes said the Eighth Amendment (which bans "excessive fines") limits the ability of the federal gov to seize property used to commit crimes…but hadn't said anything about states. And that has allowed states to use seizures like Timbs' as a way to raise money. Now, the court is saying that there are limits, even for states. Justice Ruth Bader Ginsburg (welcome back, RBG) said the car was worth "more than four times" the max fine he could have gotten.

Hate groups. Yesterday, the Southern Poverty Law Center dropped a report that found the number of hate groups in the US is the highest it's been in at least 20 years. It says there was a 30% increase in the past four years. And that the number has reached 1,020. The SPLC is a civil rights watchdog that's been around since the '70s. It's credited with helping fight the Ku Klux Klan in the courts. But critics have accused the group of moving away from being a watchdog to more of an activist in the Trump era. In the latest report, the SPLC blames President Trump, his admin, and right-leaning media outlets for fanning the flames. It says that black nationalist groups are increasing but that the majority of hate groups are motivated by white supremacist ideas. In other news, a Coast Guard lieutenant and self-described white nationalist had allegedly been planning to kill prominent Democratic politicians and journalists. Last week, he was arrested on drug and gun charges. But prosecutors say he intended to "to murder innocent civilians on a scale rarely seen in this country."

Who people are talking about again…

Hoda Muthana. She's the 24-year-old from Alabama who went to Syria in 2014 to join ISIS. Recently, she said in an interview that she made a "big mistake" and wants to come back. Yesterday, President Trump and Sec of State Mike Pompeo said 'not happening.' Pompeo said Muthana isn't a US citizen even though her family says she was born in the US. That's because as a child of a foreign diplomat, she is not entitled to US citizenship even if she was born here. Muthana is in the refugee camp in northern Syria where another woman, Shamima Begum, is asking to return to the UK. Begum also traveled to Syria to join ISIS. She says she doesn't regret going to Syria but that she wants to go back home. The UK says it's revoking her citizenship. Her parents are apparently from Bangladesh, but that country is saying 'don't come here either.' Begum is reportedly eyeing citizenship in the Netherlands, where her husband is from.

What to say when you're losing the argument…

I fold, just like Samsung's new phone. Think: a reboot of the flip phone but it can open up be tablet-sized and it'll cost you a cool $2,000. Unclear what the phone case situation will be.

What to say when you take an unflattering photo…