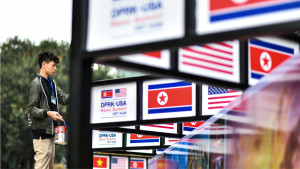 Today, President Trump and North Korean leader Kim Jong Un are meeting in Vietnam for their second summit in less than a year.

How'd that first one go again?

Picture this: Singapore. Summer 2018. Trump and Kim meet for the first time after months of exchanging threats and making everyone worried WWIII could start at any minute. It was the first time that a sitting US president and a North Korean leader met in person. Sparks flew.

Sounds...intimate. But was anything actually accomplished?

Ehhh. They agreed to work toward "complete denuclearization of the Korean Peninsula" – and Trump said it would start happening ASAP. But they left without any timeline, deadline, or steps to ensure that denuclearization actually happens. And more than six months later, US intelligence officials said the country is "unlikely to give up" all of its nuclear stockpiles.

Trump's an optimist and thinks he has what it takes to change Kim's ways. That he gets him and that they "fell in love". Critics say Trump's being delusional and that Kim is a power-hungry tyrant who won't actually commit to giving up his weapons.

So where does that leave us?

At a negotiating table in Hanoi, Vietnam where the two leaders are talking it out for two days. Here's where each side stands:

What the US wants...

Complete denuclearization of North Korea. Meaning: dismantling all nuclear weapons and facilities. And the proof that comes with it.What it's willing to give...

Easing up on sanctions on the North Korean economy. So it can flourish like Vietnam.

All US troops out of South Korea. No sanctions on its economy. And for the US to remove its nuclear threat in the region.

What it's willing to give up... Unclear

Expectations are low. But the two could agree to set up diplomatic offices in the other's country. Or they could take steps towards declaring an end to the Korean War – there hasn't been fighting since 1953, but a peace treaty was never signed (which is one reason why the US still has troops there).

Why is it so hard to get sh*t done with North Korea?

Trying to figure out actions, definitions, and rewards that are acceptable and beneficial to both countries is easier said than done. And even though Kim committed to denuclearization last summer, it's not the first time North Korea has made that commitment. The country is known for dragging its feet. And going rogue.

North Korea has been building up its nuclear weapons for years and is considered one of the world's biggest security threats. Trump supporters consider his attempts to change the dynamic commendable. But critics remain skeptical of North Korea's willingness to change. And for what it means globally: if the US softens its demands, other countries may see it as a green light to build up their own nuclear weapons. Which could lead to the same problem, different country..

That's not the only thing keeping it busy. Yesterday, it passed a bill to block President Trump's national emergency declaration. Earlier this month, Trump issued the declaration to get funding to build the US-Mexico border wall, since Congress wasn't willing to show him the money. Lawmakers on both sides say he's overstepping his power, and that this could set a precedent for future presidents to do the same. But some Republicans are backing up the president, saying there is actually an emergency at the border, and that he has the authority to declare an emergency. Next step: the Senate has to bring it up to a vote within 18 days. Four Republicans would have to vote in favor to block Trump for it to pass there. But either way, the president has already said he'll veto it. Other news out of DC: a House committee voted to subpoena the Trump admin over docs about family separation – the first subpoena since Dems took over the House. Adding to that, people want answers on the docs from the Department of Health and Human Services that show thousands of allegations of unaccompanied minors being sexually abused while in US custody between 2014 and 2018. A spokesperson for the dept – which oversees unaccompanied minors – says that their safety is "our top concern."

Tensions between India and Pakistan. The nuclear-armed countries control parts of a region called Kashmir, where their unofficial border sits. And they've been fighting for full control of it since the 1940s (including two wars). Earlier this month, a Pakistan-based militant group carried out a suicide bombing in the Indian-controlled part of Kashmir – the deadliest attack there in decades. India's PM said it would retaliate. Pakistan said it wasn't behind the attack, but would take action if India did. Yesterday, India bombed the Pakistani-controlled part of Kashmir. India claims it targeted a terrorist training camp, but it's unclear if there was any damage or casualties. It was the first time in decades that Indian warplanes crossed into Pakistan. Today, Pakistan says it shot down two Indian warplanes and captured a pilot. Flights throughout Pakistan and in northern India have been canceled – and people are very much on edge.

The United Methodist Church. Yesterday, it voted to uphold its ban on gay marriage and LGBTQ clergy members. The church is the second-largest Protestant one in the US with about 7 million members. While the church bans gay marriage, a number of clergy members have performed same-sex weddings before. And liberal members have been pushing for a more progressive stance on this issue. Yesterday during a church conference, delegates voted to keep that ban going. Now there are concerns that this will alienate a number of followers, and lead to some defections.

What your teacher friends are texting about in the group chat…

This report on racial funding gaps for schools. It says that white school districts get $23 billion more than mostly non-white school districts…even though they typically have the same number of students. Most of this has to do with property taxes. And not enough funding from states.

Nevada regulators also have a big announcement. Yesterday, they fined Wynn Resorts for ignoring sexual misconduct complaints. Last year, the former CEO Steve Wynn resigned after a report came out about multiple sexual misconduct allegations against him. Regulators in NV investigated how the company handled the accusations. Turns out, the company knew about them but didn't investigate. Now, the company's getting hit with a record $20 million fine – the largest one in the state's history. Wynn Resorts called the review a step forward for the company.