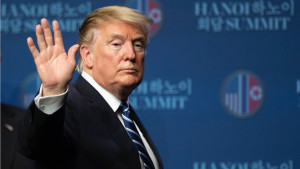 The Art of the (No) Deal

A US president and a North Korean leader walk into a summit. They both walk away with nothing.

Yeah, things didn't go as planned over in Vietnam. President Trump and Kim Jong Un both gave statements earlier in the day that seemed optimistic, with Kim saying he's ready to denuclearize. But the summit was ultimately called short when Trump thought he wasn't getting a good enough deal to shake on.

What was the hold up?

Sanctions. For years, international sanctions have been crippling North Korea's economy. Kim Jong Un wanted all sanctions lifted in exchange for dismantling parts of the country's nuclear program. Trump said 'that's not really how it works' and left when he realized Kim wasn't willing to commit to complete denuclearization – a goal they agreed upon in their last summitin 2018. Trump said he'd "rather do it right than do it fast."

North Korea is considered a major security threat for the world because of its nuclear stockpile and isolationist regime. And past presidents have tried and failed to get the country to follow through on giving up its nuclear program. Trump thought he was different. Now he's warning it could be awhile before the two leaders meet up again – stalling about a year's worth of progress.

Skimm More: The US and North Korea have had some bumpy history. We Skimm'd it for you.

Trump's former lawyer-slash-fixer Michael Cohen has a burn book full of insults about his former client.

Aren't lawyers supposed to stay quiet about your business?

Trump definitely thinks so. Last year, Cohen admitted to paying Stormy Daniels $130,000 to keep quiet about her alleged affair with Trump. Which led to FBI raids at Cohen's home, office, and hotel room. He's since pleaded guilty to things like violating campaign finance laws and lying to Congress about a Trump Tower project in Moscow. He's set to go to jail in May for three years. And stopped by Congress yesterday to get some dirt off his chest.

Like calling his former client – the president – a "racist," a "con man," and a "cheat" in a public hearing in front of the House Oversight Committee. Tell us how you really feel, Cohen. He said that Trump knew about the WikiLeaks dump of DNC emails before it happened in July 2016. That he hinted to Cohen to lie when talking to Congress about that Trump Tower Moscow project. And that Trump reimbursed him for the Stormy Daniels' payoff while he was in office. Cohen brought the receipts in the form of a signed check by Trump to prove it. Republicans said 'this guy already lied to us once, we don't trust him.' Dems said 'tell us more about the sketchy stuff.'

Cohen once said he'd take a bullet for the president. Now, he's another person in Trump's inner circle that's being investigated or charged by prosecutors. He's spilling more than tea though. And implicating the president in crimes that, if true, may put Trump in some legal trouble, on the path to impeachment, or out of the job in 2020. Until then, it mostly seems to be for (political) show. Trump called it a fake hearing, claiming that Cohen "lied a lot."

What to say when you need a social media break…

How about a tax? Millions of people in Uganda have apparently quit the internet after the country introduced a social media tax. Last July, the government imposed a daily tax (200 Ugandan shillings, which is $0.05 per day) for people using online platforms like Facebook, WhatsApp, and Twitter. The gov's using the tax as a way to raise revenue for the country and to try to stop online "gossip." It's not the first time the gov has restricted social media use. Critics said it's an attempt to limit free speech and warned that it could have a bad impact on the economy because many people rely on sending money through their phones than through physical banks. In the three months since the tax was introduced, the number of internet subscriptions reportedly fell by more than 2.5 million – meaning the tax may not generate the revenue the gov was hoping for.

What to say to the politics junkie in the group…

Heard about North Carolina? Yesterday, Leslie McCrae Dowless was charged with illegal ballot handling and conspiracy. The state's 9th Congressional District has been in the middle of an election fraud scandal. During last year's midterms, officials weren't able to certify that Mark Harris (R) had won by less than 1,000 votes. Last week, election officials said 'we need a brand new election' after a testimony implicated Dowless – who worked for Harris' campaign – in an absentee ballot scheme. Dowless is accused of directing workers to collect and mail other people's absentee ballots to benefit Harris. (BTW, it's against the law in NC for anyone other than the voter or a close relative to handle mail-in ballots to prevent manipulation.) This was apparently done during the 2018 Republican primary race and officials are still looking into what happened during the midterms. Here's something else the House of Representatives is thinking about: Yesterday, it passed significant gun control legislation for the first time in more than two decades. The bill would require background checks for all gun sales and most transfers. It now heads to the Senate, where it's unlikely to pass. There's another bill the House is expected to take on today to close a loophole around background checks. Right now, if a background check isn't finished in three days, the purchase can go on. This second bill would extend the timeframe to 10 days.

I fold, just like Decathlon. The French sporting goods retailer pulled a sports hijab from its shelves after backlash. It was originally created for customers in Morocco and was supposed to be rolled out worldwide. But politicians in France said it was a violation of French values (i.e: secular values). Initially, Decathlon defended the product. But earlier this week, it announced it would suspend its sale in France because of concerns about the safety of its staff – which it said had been insulted and threatened online. The French justice minister called the debate on this "hysterical," and said the store can sell the hijab if it wants. This is the latest instance of backlash around Islamic clothing in France – back in 2016, several coastal towns banned burkinis.

What to say when you're thinking about finding a new job…

What a coincidence, so is QB Nick Foles. Yesterday, the Philadelphia Eagles said he'll become a free agent in mid-March. Which means this Super Bowl MVP QB is up for grabs for another team to put on its roster.

What to say when you're craving pizza…