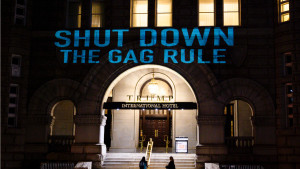 More than 20 states are suing the Trump administration over changes to Title X.

I know of Title IX…

Yeah, Title X is not as well known. It refers to the program that gives federal dollars to clinics providing family planning services to low-income Americans. Millions of women rely on these clinics to get access to things like birth control, pregnancy tests, and cancer screenings. The funds cannot be used toward abortions.

So what’s the issue?

The Dept of Health and Human Services has new rules saying that clinics getting federal money need to draw a “clear financial and physical separation” between their abortion services and the gov-funded family planning services.

It means that places like Planned Parenthood and other health clinics might have to have things like separate entrances and doctors for abortion services. As part of the new rules, HHS is also barring doctors from referring patients to abortion services. Critics are calling it the “gag rule.” Clinics that break the rules, don’t get the money. Which means that orgs like Planned Parenthood have to shift their operations or risk losing tens of millions in funding.

The Trump admin and supporters…say yes. And that the Supreme Court gave the go-ahead to a similar rule in the ’90s before the Clinton admin scrapped it. Supporters are hoping the rule will move funds away from abortion services and open up funds for anti-abortion clinics.

21 states…say no. They’re flagging that Obamacare forbids regulations that create “unreasonable barriers” for patients getting treatment. And medical orgs are saying the gov shouldn’t tell doctors what they can and can’t talk to their patients about.

California already filed a lawsuit against the gov. Today, the other 20 (mostly Democratic-led) states we mentioned above are expected to do the same. The goal: prevent the rule from going into effect in 60 days.

Since the campaign trail, President Trump promised his supporters he’d crack down on access to abortion, and nominate conservative justices to the Supreme Court – who can rule on abortion issues like this one for decades to come. He’s delivered. Now states have something to say about it.

Luke Perry. Yesterday, the actor died at age 52. You know him as teenage heartthrob Dylan McKay from “Beverly Hills, 90210.” He was once dubbed TV’s hottest heartbreaker. But your younger cousins probably know him as Archie Andrews’ dad on “Riverdale.” He was also in a number of other TV shows and movies, including “Oz” and the “Buffy the Vampire Slayer” movie. His publicist said he died after suffering a stroke last week. Celebrities – including his “90210″ co-stars – have been posting tributes on social media. RIP.

What to say when your apartment feels warmer than usual…

Who’s turning up the heat? Tensions are running high between Canada and China over the arrest of Huawei’s CFO. Reminder: Huawei is the Chinese telecom giant that the US considers a national security threat. Last year, Canada arrested its CFO because she allegedly violated US sanctions against Iran. Canada’s plan was to extradite her to the US. Soon after, China detained a number of Canadians, which led to many thinking ‘hm…retaliation?’ Now there are two big updates to the story. One: the CFO sued Canada because she says her arrest violated her constitutional rights. And, two: China’s accusing two of the detained Canadians of working together to steal state secrets. All this comes days after Canada’s gov said it’ll move forward with extradition proceedings. The country’s also dealing with some domestic drama. Yesterday, a second minister resigned in protest against allegations that PM Justin Trudeau tried to help influence a criminal case against a company there. This comes months before Trudeau is up for re-election.

Skimm More: Huawei is one of the key players in the US’s fight with China over dominance in 5G technology. Here’s what you need to know about the tech.

So does Hollywood. ICYMI, there are opinions about whether streaming companies like Netflix should be allowed to enter film festivals or be up for awards. Some – like the Cannes Film Festival – say that if the film isn’t shown in theaters for a certain number of weeks before streaming, it shouldn’t be allowed to participate. They also say that Netflix spends way more money on its films than regular studios, and that streaming has hurt the industry overall. Others – like director Ava DuVernay – say streaming services help distribute diverse types of content and that Hollywood needs to adapt to the times. This is making headlines after director Steven Spielberg threw his weight behind rule changes that would require all movies up for an Academy Award to be shown in theaters. Now Netflix is urging chill, arguing that people should have access to movies and that its platform gives filmmakers “more ways to share art.” It’s worth noting this comes as Netflix’s “Roma” did pretty well at the Oscars, taking home three awards. And months before the platform is expected to release a highly-anticipated Martin Scorsese film. So Hollywood insiders want these rules figured out stat.

A couple of bombshells. Here’s another one: Google says it paid men less than women in similar jobs. Yup. As part of its efforts to make sure women and minorities don’t get snubbed on their pay stubs, the company checks in on how much employees make each year. Turns out, some male software engineers got paid less than their female counterparts last year. But some say looking at pay isn’t enough to address the problem of leveling (translation: how new employees are assessed and assigned starting pay). Google says it’s working on that. The news comes as the company faces a lawsuit on alleged gender pay discrimination.

Carlos Ghosn. The former Nissan chairman was approved for release on $8.9 million bail. He was being held in Tokyo for several months after being charged with financial misconduct (think: underreporting his salary) and doing things like transferring his losses to Nissan. He says he’s innocent. Prosecutors appealed the bail decision – but if the appeal gets rejected, Ghosn could be released later this week.

I can take a hint. Yesterday, drugmaker Eli Lilly said it’ll sell a half-price version of its popular insulin. This comes as drug companies have been in hot water for rising prescription drug costs. Some say this move is a step in the right direction. Others say it doesn’t go far enough toward making insulin – a necessary drug for many diabetics – affordable. In other news your resident friends are talking about, a man in London seems to be the second person to have been cured of HIV after getting a stem cell transplant. He’s apparently been in remission for more than a year. Unfortunately, it doesn’t yet seem like this type of treatment could be scaled up to cure the millions of people currently living with HIV.

What to say after Colton finally jumps over the damn fence…