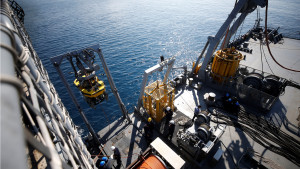 THINGS THE US IS KEEPING AN EYE ON

It's not. The report says China is specifically interested in sea-related tech that's being developed for military purposes. Think: submarine missiles, underwater communication.

Apparently, a number of schools around the world including in the US, Canada, and South Korea – like MIT and the University of Washington. They've apparently been targeted since April 2017 with phishing emails.

Because knowledge is power. And China seems to want to know what the Pentagon and countries close to it like South Korea are cooking up under the sea. Some schools have contracts with the Navy and have easier systems to hack into than the military's. While the hackers have previously been linked to the Chinese government, officials have said they don't take part in cyberattacks. So don't expect them to come clean on this one.

So is there a plan to stop it from happening or what?

The Navy says it's working on a better defense plan. But until then, it's possible this could be brought up during the US-China trade talks. A big part of the trade beef is the fact that Trump claims China has stolen US intellectual property and threatens national security. And the US has singled out tech giant Huawei as a major player in that threat – alleging that it could help the Chinese gov spy on US citizens. So this only adds fuel to the fire.

Last year, these hackers reportedly tried to to steal crucial military info from US Navy contractors. This recent news shows China is allegedly using multiple tactics to infiltrate the US military's tech and research and threaten national security.

The US has its eye on a new trade target: India.

K, bye China. What's this all about?

The US Generalized System of Preferences program. Also called GSP. The trade program helps developing countries expand their economies by letting them send some products into the US duty-free. In recent years, India has benefited from this program the most – but now it's one of the fastest-growing economies in the world.

Congrats, India. So what's the latest?

Why the change of heart?

Trump hasn't been shy that he's not a fan of India's high tariffs for US goods like motorcycles. Now, Trump says that India (and Turkey) don't fit the standards for being part of the GSP program so it's kicking them out.

How's India feeling about all this?

Not too bad. The gov reportedly says 'it's true, we kinda shouldn't have GSP status anymore.' But disagreed with Trump's claim that it hasn't given the US fair access to its market. It also says that this won't have a huge impact on the Indian economy. Unclear if it's trying to go with the flow because of its upcoming general election – where PM Narendra Modi's up for re-election.

Trump has made it clear that he's willing to throw out the diplomatic rulebook to achieve his "America First" approach to policy. So while India is a partner to the US, it's no longer getting a pass.

What to say while watching the new GoT trailer...

Here's something else people are watching: North Korea. Satellite images and analyst reports show that the country is rebuilding a rocket launch site. The North started dismantling this site last year, after the first summit between President Trump and North Korean leader Kim Jong Un. Last week, the two leaders met for a second time and walked away with no deal on ending North Korea's nuclear program. And now it looks like the North is prepping to put this site back in commission. Some say this shows North Korea toughening its stance on nukes after the failed summit.

The US-Mexico border. Last month, a record-breaking 76,000 migrants were caught crossing the border. In recent years, people from Central America have been fleeing their homes because of things like poverty and violence. Once in the US, many turn themselves in to border officials to claim asylum. But authorities don't have enough space to house a lot of people at once. So officials have sometimes turned to community shelters and hotels to help supplement housing. President Trump has issued a national emergency declaration to build a border wall due to what he calls a national security crisis there. Border officials seem to agree. But the latest numbers also highlight the Trump admin's difficulty in enacting policies that cut down on migration. Border officials say they're building a new processing center to help – but mentioned it's only a short-term solution. Meanwhile, the Senate is getting ready to vote next week to block Trump's national emergency declaration.

What people are doing these days...

Debating over vaccines. Diseases like mumps, measles, and rubella used to kill thousands of people each year. But then scientists came up with the MMR vaccine – and others that help prevent deadly diseases. Here's the problem: in 1998, a UK doctor released a study creating a false link between vaccines and autism. The study – and similar efforts to imply vaccines are dangerous – have been discredited over and over and over again. Even as recently as this week. But misinformation has taken a life of its own. Google and Facebook have been getting heat for enabling anti-vax content on their platforms. Now, Amazon's getting flak, too. This issue is coming to a head now due to a measles outbreak in the past few months, with 206 cases confirmed around the US. Congress is looking for a fix – and invited a teen who got vaccinated against his mom's wishes to testify in support of vaccinations.

Skimm More: Listen to our brand-new podcast ep for context on how the vaccine debate got started and what's at stake.

What to say when your co-worker has an outburst...

Just going to keep my cool and do my job...like Gayle King.

What to say when you hear Kylie is the world's youngest billionaire...

I can't keep up with that...or this car.

In other things getting an upgrade, Goldman Sachs.