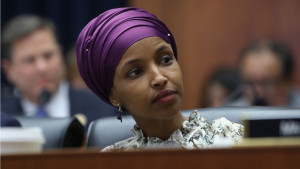 CRACKS UNDER THE SURFACE

Yesterday, the House voted in favor of a resolution to condemn bigotry.

Because it's been tearing the Democratic Party apart over the past week. This all started last month, when Rep. Ilhan Omar (D-MN) – a freshman congresswoman and one of the first Muslim women elected to Congress – tweeted a comment about "the Benjamins" that some considered to be anti-Semitic and evoking a classic anti-Semitic stereotype. She apologized. But noted that she stands by her critique of a pro-Israel lobbying group, as well as the influence it and other lobbying groups have in DC. Then last week, she made another comment about pro-Israel lawmakers pushing "for allegiance to a foreign country," which was criticized for its anti-Semitic undertones. So Dems decided to take a stance.

By voting on this resolution?

Yep. The first draft of it was specifically focused on calling out anti-Semitism. But then the vote got pushed back so lawmakers could tack on all kinds of bigotry – including Islamophobia. It also calls out white supremacists. And encourages public leaders to confront the issue head-on.

Not getting how a "resolution" about being a decent human would split the Democratic Party?

It's showing the divide between the old vs new guard. And putting some 2020 presidential candidates in a tough spot. Here's the breakdown...

The old guard...as in the more veteran Democrats and some Jewish Democrats are upset that this measure didn't just focus on stamping out anti-Semitism. And that adding bigotry of all kind watered down the original intent of all this. Some also thought that Omar should have been called out by name in the resolution.

The new guard...as in the younger, more progressive wing of the party says Omar is being singled out. And that some Republicans – including President Trump – have said racist comments in the past that haven't received this type of backlash from Congress. Also, that we should be able to openly talk about any issues around the US and Israel's relationship.

The 2020 candidates...as in some, like Sens. Bernie Sanders (I-VT) and Kamala Harris (D-CA), are trying to walk the line and say that while anti-Semitism should never be tolerated, there should be room for legitimate criticism of Israel's policies and leaders.

Well, if it were up to House Speaker Nancy Pelosi (D-CA), yesterday's vote would end the in-party fighting. Dems were supposed to spend the week focused on a major election reform bill, but that had to be put on the back-burner. Republicans – a majority of whom voted in favor of this anti-bigotry resolution – have been watching from the sidelines and taking notes on how this Democratic divide could benefit them in next year's election.

There are multiple things at play here. One, a show of force from a party that calls itself progressive to say it doesn't tolerate hate speech of any kind. Two, a free-speech debate over how to have a healthy discussion about Israel's policies and its relationship with the US. And three, an ever-looming election that makes all of these issues even more sensitive and pressing.

Paul Manafort. Yesterday, President Trump's former campaign chairman was sentenced to almost four years in prison for tax and bank fraud charges. Those charges mostly tie back to his time working for a pro-Russian political party in Ukraine, years before Trump's election. He hid millions of dollars in income from that work to avoid US taxes. And later lied to prosecutors after agreeing to cooperate with them. Now, after facing up to 24 years in prison, Manafort's expected to serve a little over three. And has to pay tens of millions of dollars in restitution. The judge said it was because Manafort led an otherwise "blameless life." Speaking of people who used to hang out with Trump, Michael Cohen. Yesterday, he sued the Trump Organization, saying the company broke its contract to pay for his legal fees. He says after he started cooperating with the gov on the financial charges against him, the money stopped. Now, he's calling on the biz to cough up at least $1.9 million.

What to say to your co-worker who needs coffee…

You and the global economy. Yesterday, the European Central Bank said it was keeping interest rates down to try to stimulate Europe's economy. This comes after the US Federal Reserve pumped the brakes on raising its own interest rates. And signals that countries around the world are experiencing economic slowdown. In Europe's case, it's in part because of fears around Brexit, slower car sales in Germany, and Italy's recession. But many are also blaming the US-China trade war. Speaking of things talking money, Philadelphia. It's now the first major US city to ban cashless stores. Some retail businesses have gone cashless to make things more efficient and safe for their employees. But more than 14 million adults in the US don't have bank accounts. Now, supporters of the new law are hoping it will protect low-income residents while businesses like Amazon Go tried to push back against it. Massachusetts has already banned cashless stores statewide. If Philly's move – which is set to go into effect in July – goes well, New York City and New Jersey could be next.

Drone deaths. Earlier this week, President Trump signed an executive order ending the gov's responsibility to report on people killed by US drones outside of war zones. For years, the US has been carrying out drone strikes in war zones like Afghanistan and Iraq, as well as targeted killings against terrorists around the world. Under the Obama admin, the gov began annually reporting on the number of deaths that drones were believed to be responsible for. Now, the Trump admin's ending the requirement to share a yearly report on drone killings in non-conflict zones. The Trump admin says the report wasn't necessary, since the Defense Dept already has to present a yearly report on civilian deaths. And that it was distracting counterterrorism operatives from doing their job. But critics say that the DoD's report doesn't cover deaths from CIA airstrikes. They worry that the official death tolls were always underreported, and that this update will add even less transparency.

Holding out for Emma.