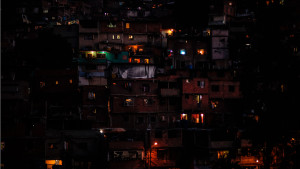 Venezuela is in the midst of a major power outage.

It is. Last week, the country’s main power plant suffered an outage, leading to days of blackouts around the country. Millions have been left without electricity or internet. President Nicolás Maduro blames the power failure on the US, which he says is trying to sabotage him since it backs opposition leader Juan Guaidó’s claim to power. But critics like Guaidó – who also goes by ‘president’ – blamed Maduro’s government for years of mismanagement.

So do people have power back yet?

In many places, no. And we’re seeing the effects. The number of hospital patients estimated to have died from the blackout range from 13 to more than 70. And economists are apparently watching to see if the outage will hurt Venezuela’s already failing economy.

The opposition isn’t backing down. Even with the internet temporarily down, thousands gathered to protest. Today, Guaidó’s planning to announce a national emergency to keep up pressure on the gov.

The bill would route all of Russia’s web traffic through state-controlled servers. And set things up so that Russia’s internet could still work if it was cut off from the rest of the world. Supporters say this bill will help with Russia’s cybersecurity. Critics see it as just another way for the gov to censor and crack down on dissent. And are calling it an online “Iron Curtain.”

This weekend’s protests were reportedly some of the biggest there in years. The question now is whether opposition is enough to stop the bill from getting signed into law – even though support for it already has momentum in parliament.

Over the weekend, thousands continued to protest President Abdelaziz Bouteflika’s choice to run for a fifth term.

Algerians think so. Bouteflika has been in power since 1999. But the country’s getting a little tired of him. The job market isn’t so hot for young people. There are accusations of government corruption. And Bouteflika has been rarely seen in public after suffering a stroke in 2013. Yesterday, he returned to the country from a Swiss hospital.

How was the reception?

Not great. People took to the streets – as they have been for weeks – to protest his choice to run again next month. The protests are considered one of the biggest threats to his decades-long rule. And some cracks are reportedly starting to show – like an indication that the military might be siding with the protesters. And a statement from his political party that it’s open to working with all parties.

There’s no evidence that Bouteflika’s backing down. Everyone will be watching later this week as the country’s Constitutional Council says whether it’ll approve his run for re-election.

Ethiopian Airlines Flight 302. Yesterday, the plane from Ethiopia’s capital toward Nairobi, Kenya crashed shortly after takeoff. All 157 people on board died. The pilot sent out a distress call and was approved to turn back but then lost contact. The plane’s flight-data recorder hasn’t been found. The plane was new – and is the same Boeing model as the Indonesian Lion Air flight that went down minutes after takeoff last year, killing all 189 people on board. The crash is raising questions for Boeing on the safety of its new plane, which is used by airlines around the world. China isn’t taking chances – yesterday it ordered airlines to ground this type of Boeing model.

Well that’s…interesting. Meanwhile, back here in the US, President Trump plans to ask Congress for $8.6 billion in new funding for the US-Mexico border wall today. Trump has been willing to go through a government shutdown and a national emergency declaration to get money for the wall. Now, this is his latest request. It’s expected to be DOA in Congress, where Dems control the House. Meaning the only thing to last longer than this funding fight, is the wait for GoT. In related news, mumps and other outbreaks are reportedly forcing US detention centers to quarantine thousands of migrants. The number of people being detained under the Trump admin has reached record highs – and some say the disease outbreaks may limit access to legal services.

In other sports news, a federal judge ruled that the NCAA cannot limit compensation or benefits for student-athletes that are “related to education.” The ruling may mean more scholarship money for student-athletes and for school supplies, but it prevents athletes from receiving unlimited benefits aka actual cash – which plaintiffs had hoped for. The NCAA is likely going to appeal the ruling because it says changes like this could lead to pay-for-play. If the ruling were to go into effect, some think it will advantage richer teams – which could use their money to help attract the best recruits.

Kelly Catlin. The 23-year-old Olympic cyclist died by suicide. She was part of the US cycling team that won a silver medal in the 2016 Olympics. And was a grad student at Stanford University. RIP.

Tucker Carlson is facing criticism over comments about women.

What to say when you find your Sunday Candy…