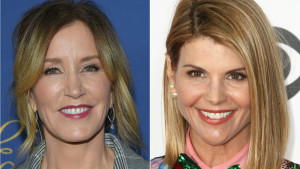 Somewhere in Hollywood a script about college admissions fraud is being written.

I have many thoughts about this. Go.

Yesterday, the Justice Department charged 50 people – including actresses Felicity Huffman and Lori Loughlin – as part of a multi-million-dollar scheme to get kids accepted into elite universities. It's the DOJ's largest college admissions prosecution, ever.

I will never look at Aunt Becky the same.

Right, who woulda thought? These parents allegedly paid a guy anywhere from $200,000 to $6.5 million to turn their money into college acceptance letters. Some tactics he used: faking SAT scores by bribing test administrators to change kids' answers after the test, paying someone to take standardized tests for them (and once again bribing administrators to let it slide), and getting at least one kid extra time by faking a learning disability. He would also bribe coaches to recruit students as athletes (even if they didn't play), photoshopping kids' faces onto pictures of athletes found online. And lied about kids' ethnicities to take advantage of affirmative action programs.

Damn. Wealthy parents will do just about anything, huh.

Apparently. Out of the 50 people charged – 33 are parents, two are exam administrators, and some are coaches from schools like Yale, Stanford, USC, and Georgetown. The alleged ringleader of all this is William Singer, who led a college prep business known as "The Key." He pleaded guilty and now faces up to 65 years in prison.

What about the kids? Did they get in trouble?

No. No students or schools have been charged. Authorities say many of the kids didn't even know this was happening. And called the parents "the prime movers of this fraud."

In case you haven't noticed, the college admissions process in the US has gotten crazy competitive. And that's when you're playing fair. This story shows how much wealth can help people game an already skewed system. And keep the money and opportunities at the top – regardless of merit.

What to say when plan B fails…

Time for plan C…or is it D. Yesterday, UK lawmakers overwhelmingly voted down PM Theresa May's Brexit deal. May has tried and failed. And tried and failed. And tried and failed again to make this deal happen. But UK lawmakers are not liking her approach to cutting ties with the EU. Important to note: they also haven't come up with an alternative. Today, they vote on whether the UK should leave the EU without a deal in place, which could lead to potential chaos. If they vote against that, parliament votes tomorrow on whether to delay Brexit (which will need the EU's blessing). But no pressure...they only have a little over two weeks to figure out the biggest trade and policy change the country has dealt with in decades.

What to say when you hear Georgia's "testicular bill of rights" is making waves...

So is California Gov. Gavin Newsom (D). Today, he's expected to sign an executive order that would block the death penalty there while he's governor. CA has the largest number of inmates on death row (more than 700), but hasn't executed anyone since 2006 – when a federal judge said its lethal injection process was unconstitutional. This new decision would hit pause on executions, close an execution room, and cancel the state's new lethal injection protocol. It would also make CA the fourth state to place a moratorium on the death penalty – behind Oregon, Colorado, and Pennsylvania. Supporters say it's a big step for those who have moral objections to capital punishment. Critics say it ignores the will of CA voters – since in 2016 they rejected a proposition to end the death penalty and voted instead to speed up appeals. The move is expected to be challenged in the courts.

Cardinal George Pell, former advisor to Pope Francis. Last year, he was found guilty of sexually assaulting two boys – but the judge ordered the verdict to be sealed so it wouldn't influence the jury in another trial against him (also about child abuse allegations). Prosecutors decided not to pursue the second case. So last month we found out the results of the first trial. Earlier today, Pell was sentenced to six years in prison – and has to serve a minimum of three years and eight months before he is eligible for parole. Pell is the highest-ranking Catholic cleric convicted of child sex abuse. He's set to appeal his conviction later this year.

It's also getting ready to pull the plug on some immigration-related offices abroad. US Citizenship and Immigration Services has international offices in 21 countries. They do things like provide assistance to US citizens, permanent residents, and refugees trying to bring family to the US. Now, the agency plans to close down its foreign offices by the end of the year. Officials say it's to move more staff to focus on the backlog of asylum cases in the US (like at the US-Mexico border). But some say the closures will make it more difficult to apply to immigrate to the US from abroad.

What to say when you watch the new "Aladdin" trailer…

What to say when you hear Odell Beckham Jr is going to the Cleveland Browns...