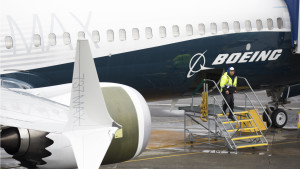 Boeing 737 Max planes have been grounded until there are answers as to why two deadly plane crashes happened in a span of a few months.

Where's this coming from?

Earlier this week, an Ethiopian Airlines flight crashed shortly after takeoff – killing all 157 people on board. The investigation is ongoing. But the pilot reported "flight control problems" and asked to return to the airport but then lost contact. The plane – a Boeing 737 Max 8 – was the same model as the Indonesian Lion Air flight that went down minutes after takeoff a few months ago and killed all 189 people on board.

So the plane is basically banned?

Yep. Yesterday, President Trump said all Boeing 737 Max 8 and 9 planes would be grounded due to safety concerns. The US was the last major country to hold out on grounding the Max 8, with the FAA saying as early as Tuesday that there were no "systemic performance issues" with the planes. Yesterday, both Canada and the FAA said new satellite data shows there's reason to put the planes on standby until there are more answers.

When you say standby…

As in, you won't be flying on a Boeing 737 Max anytime soon. Airlines will likely be shifting planes or schedules to make up for it.

Will this affect a lot of people?

It'll mostly affect people in North America and China. That's where many of these planes are used. China was actually the first country to make the call to ground the Boeing plane model. The country has looked to the FAA to make many of its calls regarding aviation in the past. Now, it's asserting itself in the conversation over airline safety. Much to the US's dismay.

Why did the US take so long to act? What's the deal there?

Ah. The elephant in the room. Here's the thing...this whole ordeal is bringing up the deep connection between Boeing, Capitol Hill, and the White House. President Trump is close with the company's CEO, and his acting Defense Secretary Patrick Shanahan worked at Boeing for more than 30 years before joining the Pentagon. There are ongoing ethics questions over whether Shanahan promoted Boeing since he started working for the gov. Oh, and Boeing has spent millions over the years lobbying DC lawmakers.

So what's being done to fix this?

Investigators are looking into whether the same problem caused the two crashes. Boeing said it has "full confidence" in the planes but supports the decision to temporarily ground them. Worth noting that following the Indonesia crash, Boeing started working on tweaking its system. And before this grounding, it had been promising to upgrade some flight-control software in the coming weeks.

I can only imagine the meetings going on at Boeing right now...

Yeah...the 737 Max planes are its current bread and butter. And this crisis could cost the company billions. Case in point: Norwegian Air has already made clear it expects Boeing to write it a check at the end of all this.

Boeing is a leader in the aircraft industry – both with commercial planes (like the 737 Max) and military planes. This safety crisis is a huge liability for the brand. And it's making people take a closer look at this billion-dollar industry to make sure that safety in the skies is the number one priority.

Skimm More: We've got your Skimm on what airlines do to prevent crashes, what you can do as a consumer, and more.