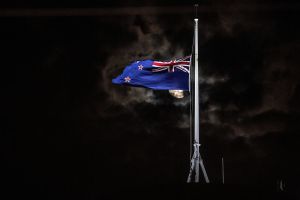 Today, there were gun attacks at two mosques in the New Zealand city of Christchurch, killing at least 49 people and injuring more than 20.

The attacks happened during Friday prayers. Four people were taken into custody – three men and one woman – but authorities said that only three are believed to have been involved. One man in his late 20s was later charged with murder and expected to appear in court tomorrow morning. Police say they also intercepted two explosive devices found on a car.

Do we know why this happened?

New Zealand Prime Minister Jacinda Ardern called it a terrorist attack and "an extraordinary and unprecedented act of violence." She alluded to anti-immigrant motivation, saying many directly affected may be migrants and refugees. One man who apparently claimed responsibility – and live streamed the attack – left behind a white nationalist, anti-immigrant manifesto. All schools there were placed on lockdown. Police are urging people to stay away from mosques around the country.

Have mass shootings happened before in New Zealand?

Yes, but they're rare. The last one happened in 1990 and left 13 people dead. It led to tighter gun laws in the country, restricting access to semiautomatic weapons. Gun owners must have a license and go through intense background checks, including an at-home visit to make sure the weapon is properly and safely stored.

How are people responding?

Multiple state leaders or diplomats have shared their sympathies and solidarity with the victims and their families. Some cities in the US have beefed up security around mosques.

Ardern called this "one of New Zealand's darkest days."

Congress pushing back on President Trump. Yesterday, the Republican-controlled Senate voted to overturn Trump's national emergency declaration he announced last month to get money for his border wall. (Spoiler, he now wants more.) But many in Congress – even those who agree with Trump's border policy – felt he was overstepping by declaring an emergency to get around Congress. And were worried that by letting this slide, it would set a precedent for future presidents to do the same. So a dozen Republicans sided with Democrats to overturn it. But don't expect this to work: Trump has threatened to veto it – and another bill the Senate passed this week to end the US's support for the Saudi-led war in Yemen. Speaking of the House, yesterday it voted 420-0 to call for special counsel Robert Mueller's Trump-Russia report to be made public, whenever he decides to drop it (Mueller…? Mueller…?). Even though Congress doesn't have the power to force the report to go public, this sent a clear, bipartisan message that the House wants transparency. But it just took one person to block it in the Senate.

What to say when you keep hearing about Brexit...

One more time for good measure. Yesterday, lawmakers in the UK voted to delay leaving the EU. Unless you've been sleeping in a cupboard under the stairs, you know PM Theresa May has been trying to figure out how to untangle the UK from the EU. But lawmakers voted her plan down. Twice. Earlier this week, lawmakers voted not to leave the EU without a plan in place for how to do it. Then yesterday, they voted to delay Brexit but ruled out a second Brexit referendum...at least for now. Here's what's next: May will try – yet again – to pass her deal. Because third time's the charm. If her plan is agreed on by March 20, she'll ask for the EU to delay Brexit until June 30. If not, May will ask for a longer delay. May's advising against this, because it means the UK would have to participate in European Parliament elections later this year and continue paying in to the EU budget. But a delay – no matter how long – will need to be approved by all other 27 EU members. If nothing gets figured out, the UK could end up having a chaotic exit on March 29. Which is in 14 days. Get ready.

What has people taking a stance…

Climate change. Today, hundreds of thousands of students around the world are expected to skip school and call for action on climate change. It all started with Swedish 16-year-old climate activist Greta Thunberg. Now, people in more than 100 countries are demanding that political leaders address the threats from climate change. And Thunberg has been nominated for the Nobel Peace Prize. What did you do in high school?

What to say when you hear about the class-action lawsuit against colleges involved in the admissions scandal...

In other legal news, yesterday the Connecticut Supreme Court ruled that families of the Sandy Hook victims can sue the gun manufacturer behind the AR-15 rifle used in the 2012 school shooting. This could provide a legal opening for other lawsuits against gun manufacturers around the US.

What to say when you're craving something sweet…

How about some π? (We had to.) NASA was feeling Pi Day (March 14 aka 3/14) and yesterday launched a rocket at 3:14pm ET. Also feeling mathematical: Google employee Emma Haruka Iwao. She set a new world record for calculating pi to 31.4 trillion digits. Easy as pi.

What to say when you hear Lilly Singh is coming to late night...