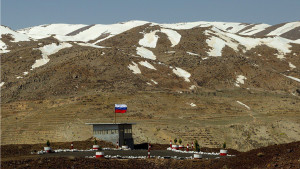 Yesterday, President Trump said the US will recognize Israel’s sovereignty over the Golan Heights.

The Golan Heights. Can you jog my memory? It’s early.

Israel captured the territory from Syria during the Six-Day War of 1967, and formally annexed it in 1981. But that hasn’t been recognized by the international community.

The UN has declared that Israeli forces need to leave the territory that’s been acquired by war. And countries around the world consider the Golan Heights an occupied territory and apparently consider Israeli settlements there illegal under international law. Previous US administrations have sided with the UN on the issue. Yesterday, Trump abruptly went another way.

He said it’s time for the US to recognize Israel’s sovereignty over the territory because it’s “of critical strategic and security importance” for Israel and the region’s stability. The US will apparently be the first country to take this stance.

Well, it follows a number of other moves Trump’s made to show the US’s commitment to Israel. That includes: recognizing Jerusalem as Israel’s capital and moving the US Embassy there. Withdrawing the US from the Iran nuclear deal. And downgrading the status of the US’s diplomatic mission to the Palestinians.

Does this affect the Israeli–Palestinian conflict?

Unclear. But Israel has occupied the West Bank since the Arab-Israeli war of 1967. And this latest move could set a precedent moving forward on whether the admin recognizes other territories in the area as Israel’s – which could cause major issues there.

What’s the reaction been?

Israeli Prime Minister Benjamin Netanyahu is pumped. He’s been dealing with corruption allegations that could put his presidency at risk. And this gives him a major boost before the country’s election in a few weeks. Syria reportedly calls the move “irresponsible,” and says it’s more determined to liberate the territory in any way possible. Palestinian officials warned that this would bring “certain destabilisation and bloodshed” in the region. Netanyahu told Trump “you made history.” And he’s right.

American policy has been to stay with the norm and not recognize the annexation of territory acquired by war. Early in his presidency, Trump said the US and Israel are great allies and Netanyahu said the two countries can work together to stop Iran from going nuclear. Since then, Trump has taken step after step to deepen ties with Israel. And now, this major shift could have repercussions for other occupied areas around the world, including the West Bank and Crimea.

Sorry, that’s not happening. But a delay is. Yesterday, EU leaders came up with a revamped Brexit plan. Here’s how it’ll work: if UK PM Theresa May can get lawmakers to approve her deal (which has already been rejected twice) next week, then Brexit will be pushed off until May 22. If lawmakers reject it, the UK has until April 12 to do some much-needed self-reflection and tell the bloc how it plans to move forward. Meaning, you can take March 29 – when Brexit was supposed to go into effect – off your cal.

What to say when your bracket’s already been busted…

You’re not alone – Facebook just got busted too. Turns out the company isn’t great at keeping people’s info private. (Pause for Taylor Swift’s surprised face.) Earlier this year, a routine security review found that employees had access to hundreds of millions of users’ passwords because they were stored as plain text. Problem, because they’re normally supposed to be encrypted. The company says there’s “no evidence to date” that employees actually accessed the passwords, but it still raises red flags as to whether Facebook and other social media platforms can be trusted – yet again – with things as basic as passwords. The company is reportedly still looking into how this happened. Meanwhile, some former Tesla employees are also in some trouble. The company is suing them for allegedly stealing trade secrets and giving them to a rival startup company. No comment from the companies or the employees on all this.

That’s not the only thing on the White House’s mind. Yesterday, President Trump signed an executive order on free speech on college campuses. The specifics: schools have to follow free speech standards set by the admin – and if they don’t, they could lose federal funding. Conservatives have said their voices aren’t heard at schools, and that threats of protests or violence have led to speakers’ events being cancelled (hi, Milo Yiannopoulos). This order isn’t expected to bring drastic changes – schools are already required to do this – but it may provide better oversight and enforcement of the rules.

What to say after having déjà vu…

This is all too familiar. An American figure skater – Mariah Bell – was accused of slashing a South Korean rival’s leg during practice for the world champs. The International Skating Union says that it’s aware of the incident, but it doesn’t look like this was intentional. Putting down our casting list for ‘I, Tonya: Part Two.’

Before you do that, check out Emilia Clarke’s New Yorker article. She’s opening up about the two brain aneurysms she suffered in the early seasons of “Game of Thrones.” Nothing can bring down the Mother of Dragons.