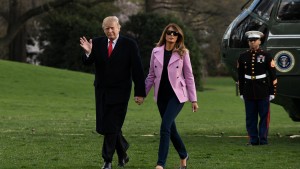 President Trump wants to lower the number of people entering the US through Mexico.

Trump has updates on how exactly he plans on doing it. Over the weekend, he threatened to shut down the US-Mexico border. He also said he'll cut aid to three Central American countries.

Why is he doing this?

Because in recent months, there's been a major uptick in the number of people crossing into the US at or between official points of entry.

When you say major…?

About 100,000 people a month. No matter how they got in, people in the US are allowed to apply for asylum on the grounds that they're fleeing specific types of violence. They're supposed to get an answer within 180 days. But with the current rate of people entering the country, the US legal system is overloaded. As are US border agencies. There's a major backlog in processing these claims. And the result is what some people have called a humanitarian crisis – with a shortage of beds to house asylum seekers, among other concerns.

Well for years now, lawmakers on both sides of the aisle have attempted to pass comprehensive immigration reform. But failed. In the meantime, the Trump admin is taking things into its own hands.

Tell me what that entails.

First, closing the US-Mexico border. Trump has threatened to close it in the past. But he's backed down. That might be because it could lead to a serious strain on the US economy. Mexico is the US's third-largest trading partner. They swap about $1.7 billion in goods every day. And the US Chamber of Commerce says closing the border could threaten 5 million American jobs. But Trump seems ready to take the hit.

What makes you say that?

Because over the weekend, his admin said "something dramatic" needed to happen for him to change his mind and not close the border this week. Then there's the threat against Central American countries.

The US sends hundreds of millions of dollars in aid to Central American countries like the ones many people are fleeing – El Salvador, Honduras, and Guatemala. Some of that money goes to programs working to curb gang violence. Trump says these three countries take advantage of the US and have done nothing to stop migrant caravans. Now, he says he'll cut the flow of funds to them...something Congress would need to sign off on. Skeptics are warning that cutting the money could backfire – leaving conditions in those countries worse off and encouraging more people to flee to the US.

Immigration has been front and center on Trump's priority list. And his admin's strategy to deter migrants from coming to the US has so far been to: build a wall, separate families, and make some asylum seekers wait in Mexico. Now, it's hoping to crank up the pressure on Mexico and Central American countries to stem the flow of people. But it's not entirely clear what these countries can do – legally or practically – to stop people from coming and submitting legitimate asylum claims.

The Middle East. Yesterday, the Arab League rejected the US's recognition of Israeli control over the Golan Heights and Jerusalem as Israel's capital. As a squad, the Arab League has had some rough patches recently (think: kicking out Syria, Saudi Arabia and friends boycotting Qatar). But at an annual summit over the weekend, leaders could agree on one thing: Israel. Specifically, the US's support for Israel's disputed claims over territory. This all comes as Israel and Gaza are trying to calm tensions. Over the weekend, tens of thousands of people in Gaza showed up to protest Israel's blockade. Some threw rocks and explosive devices, and Israel responded by shooting and killing four Palestinians – including three teenagers – and injuring dozens more. Yesterday, some rockets from Gaza were fired into Israel. Egypt is working on a ceasefire that could see reduced violence in exchange for Israel loosening its blockade. It's unclear if that could work but Israel has since reopened two Gaza Strip crossings.

What to say when your company hires its first female exec...

About time. Over the weekend, lawyer Zuzana Čaputová was elected as Slovakia's first female president. Čaputová ran an anti-corruption, progressive campaign focused on political reform. She's considered an outsider who made it to a runoff – and now she's won the presidential election with close to 60% of the vote. Her win is giving a boost to liberals in central Europe, where rightwing movements have been having something of a moment. Speaking of elections, Ukraine. Yesterday, comedian and anti-corruption candidate Volodymyr Zelenskiy appeared to take the lead in the first round of Ukraine's presidential elections. The kicker: he plays a president on TV...but has no real political experience. Now Zelenskiy will likely head to a runoff against incumbent Petro Poroshenko on April 21. Eyes are on this election because of the country's tense relationship with Russia.

What to say to your friend watching the final season of "Veep"...

Also watching to see what happens with Joe Biden. In an essay for The Cut, former Nevada state assemblywoman Lucy Flores accused the former vice president of inappropriately touching her in 2014. She says that he kissed her on the back of the head at a campaign rally and that he made her feel "uneasy, gross, and confused." Yesterday, Biden said that while he made "expressions of affection" on the campaign trail, he never thought he acted inappropriately, and that he would "listen respectfully" to those who suggested he had.

Nipsey Hussle. Yesterday, the 33-year-old rapper was shot dead outside his clothing store in Los Angeles. His debut album "Victory Lap" had been nominated for Best Rap Album at this year's Grammys. He was also known for his interest in tech and his work in developing Vector 90, a co-working space to help connect inner city kids to opportunities in Silicon Valley. Two other people were injured in the shooting. Police are still looking for the suspect. Rihanna, Drake, and others have posted tributes to Hussle.

He's got something else to be upset about. Yesterday, no. 1 Duke lost against no. 2 Michigan State. Which means MSU is headed to the Final Four and will face no. 3 Texas Tech. Meanwhile, no. 5 Auburn will battle it out against no. 1 Virginia. The madness is making its way to April, and the NCAA might wanna hide its rugs.

What to say when you hear Elon Musk is feeling lyrical...

I'm about as excited as Robert Smith.