Daily Skimm: Algeria, Turkey, and the Arrival of Brunchables 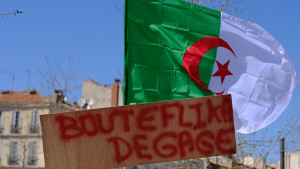 Yesterday – after 20 years in power and weeks of protests – President Abdelaziz Bouteflika stepped down.

Yup. It’s a win for millions of Algerians who have been rallying against high youth unemployment rates, government corruption, and years of political repression and censorship.

The toppling of the country’s longest-serving president is shaking up the Arab world, and giving everyone #tbt vibes to the 2011 Arab Spring, which led to regime changes in Egypt, Libya, Tunisia, and Yemen. But, as we learned from that, it’s not always clear what happens when an authoritarian regime goes away. What to watch for now is how the country handles what comes next.

A glass of wine and binging “Schitt’s Creek” always works for me.

Yeah, that might not do the trick for President Recep Tayyip Erdoğan. Earlier this week, the country turned out for local elections and Erdoğan’s Islamist party narrowly lost control of Istanbul and Ankara – Turkey’s two biggest cities. Yesterday, his party challenged the results, arguing there were voting irregularities. Today, the country’s election board reportedly approved a recount in a few districts, and there are concerns the government might try to manipulate the results.

Last year, Erdoğan won re-election and consolidated power by doing things like abolishing the prime minister’s office and appointing judges. But the country’s been in recession and Erdoğan has been reluctant to take basic steps to help fix it. Now, Turkey’s shaky financials are showing cracks in a party that’s dominated politics there since the ’90s.

The Philippines Supreme Court wants some answers on the government’s war on drugs.

What kind of answers?

Like an explanation for the deaths of thousands of people. Since President Rodrigo Dutertecame to power in 2016, police have killed between 5,000 and 20,000 people – many who were poor and some alleged political rivals. The gov has acknowledged some of these deaths, but thousands have gone unexplained. Now, the solicitor-general reportedly has two months to turn over thousands of police reports explaining how these people died.

Duterte has been cracking down not only on drugs but on political dissent and press freedoms. But it’s the drug war that’s served as a focal point for human rights groups in the Philippines and abroad. Now, his gov is on watch for how it responds to demands from its own judiciary…an institution whose chief justice – a Duterte critic – was ousted last year.

Senate Majority Leader Mitch McConnell (R-KY) is going nuclear. After the Senate failed to pass a resolution that would cut the time it takes to confirm non-Cabinet level and district court judicial nominees, McConnell said ‘hold up.’ He plans to use the so-called “nuclear option” to get his way. This is basically a Senate tool that lets something pass with a simple majority of votes. While this new debate rule would help President Trump’s nominees be confirmed quicker, it could backfire on Republicans if or when there’s a change of power in the Senate. Here’s what the Senate won’t be dealing with anytime soon: a replacement for the Affordable Care Act. Republicans are going to wait until after next year’s elections to revisit the health care debate since Dems control the House right now.

It’s not the only city with news…drumroll, please. New York City is getting the country’s first congestion pricing. Stay with us. As part of the state budget, it will charge drivers who come into the city’s most congested neighborhoods – aka below Central Park. It will most likely use an electronic toll system (like E-ZPass) to bill drivers. It’s supposed to be a way to raise money for the city’s aggravating, reason-you-keep-taking-cabs public transit system. No exact tolls have been set but cars and trucks could have to pay well over $10. It’s expected to start in 2021, and other big US cities are watching to see how it plays out.

Consider this your warning. Yesterday, NASA Administrator Jim Bridenstine accused India of endangering the International Space Station. Last week, India blew apart one of its satellites orbiting Earth to test a rare anti-satellite weapon. Now, Bridenstine is saying that it created hundreds of pieces of orbital debris – and that some are big enough to pose a potential threat to the ISS. He’s afraid that other countries could follow India’s lead. But don’t worry: the space station will move out of the way if needed, and the threat is expected to go away as most of the debris burns up when it enters the atmosphere. So no need to jump up and save the planet just yet…but until then, please recycle. And stop using plastic straws.

Can’t hate on this. The Department of Agriculture announced it will end all experiments on kittens. Since the ’80s, it has used thousands of cats to research a deadly foodborne illness. But last month, a bipartisan bill described this as “taxpayer-funded kitten slaughter.” Now, the USDA is taking the hint. Save the kittens 2019.

Here’s something that will last to the end of time: Brunchables.

What to say when your Instagram feed is feeling stale…