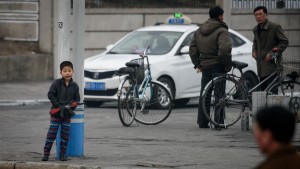 A PEEK BEHIND THE CURTAIN

North Korea has struggled to feed people for decades because of things like a dysfunctional government and a series of bad harvests. In the '90s, a famine there left anywhere from hundreds of thousands to more than a million people dead.

The regime has worked to improve food security. But it still stands accused of not doing enough to feed its population. International sanctions on the country – which do things like limit trade – haven't helped. But while the international community has used these sanctions as a way to try to get North Korea to drop its nukes, there are supposed to be exemptions for humanitarian aid. The problem: stricter sanctions in recent years have made it harder for the aid to get through.

Out of a population of 25 million people, more than 10 million (around 40%) are estimated to be undernourished. And at least one in five children are dealing with chronic malnutrition. In short: things are at a crisis level. Many blame the crisis on a series of natural disasters in the country (think: prolonged heatwave, a typhoon, floods). But the government also blames sanctions. And the UN's calls for help are getting louder, asking the international community to help the citizens of North Korea.

Is this a UN thing or does North Korea agree?

It's nodding in agreement – which is actually kind of a big deal in and of itself. For a while, the country has resisted asking for help. Because isolationist regime and all. But before last month's summit between US President Trump and North Korean leader Kim Jong Un, North Korea said the country's food supplies were running low – a rare admission for the country.

North Korea's been pushing hard to ease sanctions. But some have been wary of the Kim regime, accusing it of weaponizing the food crisis just to try to get sanctions relief. Now, the UN is calling on everyone to put their politics aside and do what they can to help relieve this crisis.

Ethiopia's preliminary report into last month's Boeing plane crash. It found that the pilots followed proper protocol when the Boeing 737 Max 8 started to nosedive. And that despite doing all the procedures Boeing recommends, they weren't able to stop the plane from crashing, killing all 157 people on board. The report doesn't blame Boeing, and details could change before it's finalized in the coming months. But it does put the pressure on Boeing and aviation authorities to investigate the plane's aircraft control system and confirm the problem is fixed before the planes are able to fly again.

Alabama. Yesterday, the Justice Department threatened to sue the state's prison system over things like violence and sexual abuse among male prisoners. At least 24 people were killed within Alabama's prisons since 2015. After investigating for more than two years, the DOJ found that it might be much higher since the state failed to properly classify violent deaths. Now, it's warning Alabama that the state could be in violation of the Eighth Amendment, by failing to protect prisoners from cruel and unusual punishment. Alabama has a few weeks to shape up or the DOJ could sue. But that's not the end of it: the DOJ is still investigating accusations that prison staffers engaged in excessive force against prisoners and sexually abused them. And those investigations could end in indictments. Speaking of things on the Trump admin's radar: school lunches. Six states and DC are suing the Department of Agriculture for rolling back Obama-era school lunch nutrition standards designed to limit childhood obesity. The Trump admin said it was hard to find food under those standards that students liked to eat. But the states are saying the public should have had a chance to comment.

Neither can Facebook. Yesterday, a cybersecurity firm said it found hundreds of millions of records from Facebook users. There were two issues: one, a Mexican media company improperly stored data like people's comments, likes, and reactions. Two, a third-party app that stored things like names, email addresses, and passwords. But the cybersecurity firm says both kept this data on Amazon's cloud-computing servers, which are publicly accessible. Facebook responded to the news by saying that it's against policies to store info about users in a public database. Honestly, we're tired for Facebook at this point.

What to say when your company's accountant asks for receipts…

You and House Democrats. Yesterday, the House Judiciary Committee voted to OK subpoenas for special counsel Robert Mueller's full, unredacted report. In case you've been vacationing for two years (tell us your secrets): Mueller looked into whether the Trump campaign colluded with Russia during the 2016 election. He finished his report last month, and AG William Barr (a Trump appointee) summed it up, saying there was no conspiracy. And that Mueller was 'meh' on whether President Trump obstructed justice. But some on Mueller's team are frustrated with how Barr summarized the report. And Dems want to see the full thing. Barr said 'give me a minute' since he has to redact info that could be illegal for him to release publicly. Now – after yesterday's party-line vote – Dems officially have the go-ahead to issue subpoenas. But they're holding off for now. Something they aren't holding off on: Trump's tax returns. While you can barely get your act together in time for this month's tax deadline (get on it), House Dems can't relate. They're excited to pore over the six years of Trump's tax returns they asked the IRS to hand over yesterday. Speaking of Dems, Joe Biden. Yesterday, the former VP read the room and says he'll be "more mindful and respectful of people's personal space" from now on. Welcome to the straight-arm club.

Try being a finance bro in 2019. Now that Patagonia has forsaken them...where will they turn?

What to say while you're still shook from the "Joker" trailer…