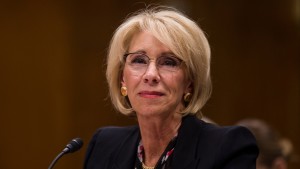 THINGS HAPPENING ACROSS THE COUNTRY

The medical school at Texas Tech University is changing its admissions policy.

It's been a minute since I was applying to college.

Same. But hear us out. In 2005, the Education Department started investigating Texas Tech after an anti-affirmative action think tank filed a complaint about its admissions practices. The school has since stopped using affirmative action at its pharmacy school and in undergrad admissions. But the medical school argued that it needed to consider race because doctors from different backgrounds would best serve the state's diverse communities.

K so what's the problem?

Last year, the Education Department revoked Obama-era guidelines on how schools could legally consider race as a factor to encourage diversity. Now the medical school at Texas Tech has agreed to stop using race when considering applications. The department reportedly suggested other ways of finding diverse talent – like sourcing from low-income areas or first generation college students.

Back in 2003, the Supreme Court ruled that universities could consider race in admissions decisions. But left some wiggle room for interpretation. This agreement between the Trump admin and Texas Tech could give us a preview of how other investigations about college admissions could go. See: Harvard and Yale's alleged discrimination against Asian-American applicants.

Should I be scared?

Depends, are you vaccinated? The issue is the spread of measles – the very contagious disease caused by a virus that can be prevented with a vaccine. Since January, there have been at least 465 measles cases in the US. For reference, there were at least 372 measles cases in all of 2018. So people are a little...on edge.

Yep. For months, NYC officials have been fighting a measles outbreak affecting the ultra-Orthodox Jewish community in Brooklyn. They've tried several solutions: education and outreach as well as banning unvaccinated kids from going to school. But measles cases are still on the rise there. Yesterday, Mayor Bill de Blasio (D) declared a public health emergency that will require unvaccinated people living in parts of Brooklyn to get the measles vaccine, or risk possible fines of $1,000. This comes about a week before Passover starts – and families could come in contact with others who are vulnerable.

Back in 2000, authorities declared that measles had been eliminated in the US. But now, the number of people getting measles abroad and bringing it into the US is increasing, as well as the spread of it in communities of unvaccinated people. Which leaves officials trying to stop the spread of the virus while also educating people about the importance of vaccinations.

Pittsburgh is restricting the use of assault style weapons.

Last year, a gunman opened fire during a morning service at a synagogue in Pittsburgh. 11 people were killed and seven others were injured. It's been called the deadliest attack on the Jewish community in US history. Mayor Bill Peduto (D) called it the "darkest day" in the city's history and said that "hatred will never win out." Last week, the entirely Democratic city council approved a ban on the use of assault style weapons in public, which includes loading or firing them. But it would apparently still be legal to own these types of guns. It also lets authorities temporarily take guns away from people that are deemed a risk to themselves or others. Yesterday, Peduto signed it into law.

Even though the mayor signed it, this is just the beginning of the legal battle. Some Pittsburgh residents filed a lawsuit backed by the NRA, which says they "have a right to carry the self-defense tool that best suits their needs." But some local lawmakers are apparently hoping other places use this as inspiration for their gun control measures.

Israel is waiting to find out who its prime minister is. Right-wing PM Benjamin Netanyahu looks like he's headed toward a historic fifth term as Israel's prime minister. But the race was neck-and-neck between him and centrist Benny Gantz. Both seem to have won the same number of parliamentary seats. But to actually govern, one would need to cobble together a majority coalition – something Netanyahu's party looks ready to do with the help of other right-wing parties. On the one hand, the surprisingly close election marks a weak point for Netanyahu, and highlights how left-leaning parts of the country pushed back against his long-serving administration over issues like corruption allegations and Netanyahu's promise to annex parts of the West Bank. On the other hand, Netanyahu's supporters seem to have elected him despite facing possible indictment. And he could now have a mandate to deliver on his West Bank promise…which could have broad implications for the Israeli-Palestinian peace process. Speaking of countries with a vested interested in who leads them…Algeria. Protesters aren't happy that an ally of the leader they just spent weeks working to oust is now stepping in as interim president.

Brexit is also keeping us on the edge of our seats. Yes, the same Brexit you've been hearing about non-stop for months. Last week, UK PM Theresa May asked the EU for an extension until June 30 to figure out how exactly Brexit would happen. Today, EU leaders are meeting for an emergency summit to decide whether to give the UK more time. But European Council President Donald Tusk is feeling like Oprah and wants to give the UK a one-year extension. You get an extension, and you get an extension. He says that it's unlikely the UK will have its sh*t together by June and this would give the UK more time to "rethink its Brexit strategy." It's unclear if the other kids on the bloc will back his deal, but every EU nation has to agree on any new timeline. And if that doesn't happen by Friday, Brexit's going down without a deal in place, which will cause all sorts of chaos. Brilliant.

Skimm More: We Skimm'd everything you need to know about Brexit.

Also coming soon: tariffs. The US and EU are about to hit each other with tit-for-tat tariffs because of plane disputes. Ah it's been a while since we talked about tit-for-tat tariffs. Here's what this new round is about: Boeing (the major US aircraft manufacturer) and Airbus (the major European aircraft manufacturer) are competitors. For years, both sides have accused the other of giving illegal subsidies to their respective companies. The World Trade Organization has found both of them guilty of doing just that. As retaliation, yesterday President Trump said the US is slapping $11 billion in tariffs on EU products (think: olive oil, wine, cheese) to make things even. Now the EU is prepping its own tariffs in return. In other Boeing news, the company reported that there hasn't been a single order for its Boeing 737 Max model since the recent deadly crash. Its stock felt the effects.

What to say when your day is going downhill…

Could it get any worse? Lori Loughlin, her husband (the one that's not Uncle Jesse), and 14 other people are facing new charges in the college admissions scandal. While they were already charged with conspiracy to commit mail and wire fraud, they're now facing money laundering charges. The max prison time for both charges is 20 years. Each. Meaning Aunt Becky could be in prison for 40 years. Repeat: 40 years. Consider this your daily reminder that cheating isn't worth it.

So is former NBA star Magic Johnson's time with the Los Angeles Lakers. Yesterday, he said he's stepping down as the team's president of basketball operations. He didn't give the team's owner or general manager a heads-up before the announcement. This came the same day that the Lakers finished their (pretty rough) season – the team isn't moving onto the playoffs for the sixth year in a row.