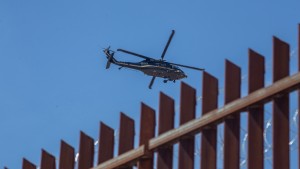 Before we get into this, can you remind me about them?

They're places that have rules limiting local officials' cooperation with ICE to help arrest and detain undocumented immigrants. They're mostly left-leaning cities like San Francisco, NYC, LA, Chicago, and Boston.

Thanks. So what exactly is the Trump admin doing?

Over the weekend, he said he was considering moving migrants caught crossing into the US illegally to these cities. And defied his admin's claims that it had dropped the idea. The admin says it's not ideal, but it's an option if Congress doesn't overhaul immigration law.

What's the point of that?

To help fix some problems at the border. There's a record number of migrants trying to get into the US, straining resources. It's also led to a backlog of hundreds of thousands of immigration cases. The admin thinks that moving migrants to other cities could help ease the pressure at border towns. But some think it's just political retaliation.

More on that, please.

Trump says that the "radical left always seems to have an open borders, open arms policy" and that they should be happy about this new potential policy. Some Democratic reps and mayors have already said they'd welcome the migrants. And there's the potential that this move could help migrants get approval to stay in the US. At the same time, many have criticized the policy as a cynical way to treat people seeking political asylum.

So can Trump actually do this?

It's not clear he has the money for it. This could cost DHS a lot, and leave the department – which is already dealing with a staffing shake-up – liable for problems that may happen during transfers (like injuries). Also, it's not entirely clear that the move is legal.

Immigration has been a top priority for President Trump, and his admin has struggled to deal with the influx of migrants. Now, he's hoping to use sanctuary cities as a way to call Democrats' bluff and get them to the negotiating table to talk border security.

New management, please. Last week, Sudan's military overthrew President Omar al-Bashir, after months of protests and a days-long sit-in. It marked the end of the leader's brutal 30-year rule. But protesters have refused to stop until there's a civilian government. Now, amid pressure, the military reportedly says it'll name a civilian prime minister and cabinet – but will hold off on tapping a new civilian president. It's not expected to be enough to satisfy protesters. Meanwhile, down in Madagascar, a measles crisis is apparently getting worse. More than 1,200 people have reportedly been killed and more than 115,000 are infected. You need a high immunization rate to help prevent a measles outbreak (think: about 90-95% of people in an area). But in Madagascar, less than 60% of people are vaccinated. Now public health officials are apparently struggling to expand access to vaccinations quickly enough to contain what could be the country's largest outbreak, ever.

Skimm More: Here's where things stand with measles in the US.

Rep. Ilhan Omar (D-MN). While talking about Islamophobia at an event last month, Omar – one of the first Muslim congresswomen – said that the Council on American-Islamic Relations "was founded after 9/11 because they recognized that some people did something and that all of us were starting to lose access to our civil liberties." (Note: CAIR was founded in 1994.) Some were concerned that Omar's "some people did something" language underplayed the severity of the attacks...including President Trump. Over the weekend, he tweeted a video criticizing Omar that included images of the attacks and the words "we remember." Democrats – including a number of 2020 candidates – have accused Trump of inciting violence against Omar, who has faced death threats since taking office earlier this year. And have called on him to take the video down. Speaking of 2020, Pete Buttigieg is officially joining the field.

What to say when the paper reaches the bin...

Ah, how it must feel to be Tiger Woods. Yesterday, Woods made one of the biggest comebacks in sports history with his fifth snazzy green Masters jacket and his 15th major title. It was also his first win in more than a decade after struggling with injuries, a DUI, and a sex scandal. That means he's one step closer to Jack Nicklaus' career record of 18 major titles. Don't you fore-get about me.

What to say when you wave goodbye to HQ Trivia's host...

Hollywood writers are waving goodbye to their agents. Since the '70s, the two have coexisted in a pretty simple relationship: writers bring the talent and agents get them jobs...in exchange for a cut of the money. But over the weekend, talks between the two broke down. That's because the writers' union – the Writers Guild of America – was frustrated over how agents were starting to work more closely with studios without passing on the extra money. Now, the writers' union is telling 13,000 Hollywood writers to fire their agents until they can work something out. But heads up, if this continues for a while longer (think: June), it could be harder for new shows and movies to hire talent.

What to say when you feel like someone's watching you...