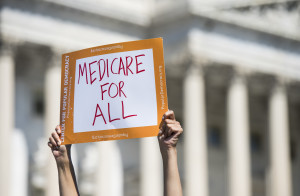 Medicare and Social Security are in financial trouble.

How much trouble are we talking about?

A new report shows that Medicare is set to become insolvent by 2026. And Social Security by 2035, once it starts dipping into reserve funds next year, for the first time since 1982.

It’s when someone (or something) can’t pay debts that are owed. This year’s report is not terribly different from last year’s grim prediction. But now the trustees for Social Security and Medicare are calling on lawmakers to take action “sooner rather than later.”

Unclear. It’s not common to make edits to these programs (think: increasing payroll taxes or raising the retirement age). So lawmakers have avoided making cuts.

Yep. If things don’t change, both programs eventually won’t be able to cover the cost of promised benefits. For Social Security, that could mean benefit cuts to retirees, disabled workers, and their dependents – some of whom rely on the program for basic living costs. For Medicare, it could mean medical providers (think: hospitals and nursing homes) getting only part of the fees that had been agreed upon. And patients having to pay more out of pocket.

The words “Medicare” and “Social Security” can sometimes feel like issues we can keep kicking down the road. But what happens to entitlement programs today and in the years to come could affect your life when you’re done working 9-to-5. Or when you have health-related issues. So, many Americans (think: tens of millions) have a vested interest in what happens to these programs.

$: What’s money got to do with it? Here’s how the Social Security news could affect your wallet.

The Supreme Court announced it would decide whether a federal law protects LGBTQ people.

Title VII of the Civil Rights Act of 1964. It prevents employers from discriminating on the basis of sex. The question the Supremes have to answer now is whether that includes someone’s sexual orientation and gender identity.

What’s the case at hand?

You mean cases. There are three that SCOTUS will be reviewing: two include claims that employers discriminated against some employees because they are gay. One is about whether discrimination laws apply to transgender workers.

When is this going down? Want to add it to my calendar.

Next term. Until then, the court will start hearing arguments today on whether or not the Trump admin can ask about citizenship in the 2020 census.

Any decisions on job protections could come up as the country gears up for next year’s presidential election. And this will become a major test for the court’s conservative majority. All eyes could be on conservative Chief Justice John Roberts, who at times broke ranks and sided with liberal justices.

Sri Lanka. The FBI said it will help investigate the suicide bombings that happened there earlier this week, leaving at least 321 people dead and more than 500 wounded. The government said it believes National Thowheeth Jama’ath – a local Islamist militant group – was behind the attacks. And that they were in retaliation for the mass shooting at two mosques in Christchurch, New Zealand last month. Because the attacks were coordinated, the extremist group is believed to have gotten an assist from an international network. Many are also questioning why the government didn’t seem to take enough action after international intelligence agencies warned it about the threat. Now, the gov is giving the military more power to detain and interrogate suspects – apparently without court orders.

President Trump. Yesterday, he sued to stop House Democrats from accessing details on his finances. Last week, the House Oversight Committee subpoenaed Trump’s accounting firm. It said this was in part because Trump’s former lawyer-slash-fixer Michael Cohen testified earlier this year that Trump fudged the numbers on how valuable his assets are. And that it’s looking into whether Trump violated the emoluments clause. Trump says House Dems are overstepping by trying to peek into his wallet. Expect this to get caught up in legal limbo.

Thing to Know: Emoluments. Not a skincare ingredient (that’s emollients). It’s the part of the Constitution that works to ensure elected officials don’t have financial conflicts of interest that could affect how they do their jobs.

…Oh and speaking of people not wanting to deal with money problems: Herman Cain. Yesterday, he backed out from being considered to sit on the board of the Iron Bank…er, Federal Reserve.

Iran. Yesterday, the US said it was ending sanctions waivers to eight countries buying up Iranian oil. Last year, the US pulled out of the 2015 Iran nuclear deal and reimposed sanctions. But President Trump gave several countries six months to find new sources of oil before sanctions hit. Now, the US is saying ‘no seriously, wrap it up.’

Sen. Elizabeth Warren (D-MA). Yesterday, the 2020 presidential candidate announced a plan to cancel most student loan debt and eliminate public college tuition. Warren’s team says this would cost $1.25 trillion over 10 years. And that she would pay for it by upping taxes on the wealthy – raising $2.75 trillion. But others have dismissed the idea as a program that would benefit Americans who already have higher earning potential because of their degrees.

…Oh and speaking of people who would like you to call them ‘president’: Rep. Seth Moulton (D-MA). Yesterday he threw his hat into the never-ending list of 2020 candidates.

Who’s been accused of sexual assault…

Luke Walton. A new lawsuit alleges that the Sacramento Kings head coach assaulted former Spectrum SportsNet host Kelli Tennant while he was an assistant coach with the Golden State Warriors. She claims he invited her to his hotel room to discuss a book she was working on, where he pinned her to the bed, and forcibly kissed and groped her. Walton was recently introduced as the Kings’ new head coach after leading the Los Angeles Lakers for three seasons. His lawyer called the allegations “baseless.”

When you want strong role models…

CBS Sports has some ideas.