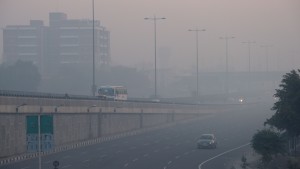 That air you just breathed might be unhealthy. Wish we were kidding.

For decades, the US had gotten a handle on air pollution thanks to things like pollution laws (see: the 1970 Clean Air Act) and phasing out the use of coal. But according to a new report, it looks like we're taking a step back.

How far back are we talking?

Far enough that more than 141 million Americans apparently live in places with unhealthy levels of air pollution or smog. That's more than four in 10 people. Problem, because pollution is linked to breathing issues, lung and heart diseases, and even early deaths.

If one were to point fingers...where would they point them at?

The report is calling out the Trump administration. President Trump promised to "promote clean air and water." But his admin has worked to roll back environmental regulations and protections (think: emissions standards, water protections). And deregulation could be to blame for putting tens of millions at risk. His admin is also trying to cut down the budget for the Environmental Protection Agency (EPA) – something the report warns could make it harder to enforce pollution laws.

Interesting. I thought you were gonna say climate change.

We were getting to that. Thanks to climate change, temps are going up, wildfires are getting worse, and smoke has been spreading. More smog is forming on warmer days. Several of the most polluted cities are on the West Coast – particularly California. On a lighter note, places like Bangor, ME and Wilmington, NC are looking so fresh and so clean, clean.

7 million people worldwide die each year from poor air quality. And while the US's air quality is nowhere near as bad as India or China, the trend now seems to be headed in a dangerous direction. To end it on a positive note: Remember that there's a lot of ways you can help reduce air pollution – like reaching out to lawmakers, driving less, and using less electricity.

What has less of a conception of privacy than your parents…

Facebook. Yesterday, the company said during its earnings call that it's setting aside up to $5 billion in case the Federal Trade Commission fines it for privacy violations. Last year, the FTC started investigating Facebook over the Cambridge Analytica scandal – the one where a political consulting firm got access to tens of millions of users' data. The FTC's been looking into whether that violated Facebook's user agreement to get permission to share your data. Since then, Facebook and the FTC have been in negotiations. If Facebook has to pay in the billions, it would be the FTC's largest fine yet against a tech company.

...Oh and Mark Zuckerberg has a podcast now. So, he probably hopes you'll focus on that.

Who's in the spotlight...

The Boy Scouts of America. This week, it came out that the nonprofit had kept a list that included more than 7,800 scout leaders known or suspected to have sexually abused boys since 1944. And that it had identified more than 12,000 victims. Read those numbers again. It's more than six times the number the Boy Scouts told a court back in 2012. The BSA denies it's been hiding this list from law enforcement. And argues the list has helped it keep potentially dangerous adults away from kids.

Keeping an eye on: New York. Earlier this year, NY passed the Child Victims Act, which allows sexual abuse claims from any time period to be brought up in spite of statutes of limitations. It goes into effect in August. So, many expect NY to be the state where charges could be brought.

Skimm More: Listen to our in-depth story in our latest podcast ep.

What has the UK testing its relationships...

Huawei. The UK decided it would let the Chinese tech giant build out part of its 5G networks. ICYMI, the US and China are in a tech Cold War of sorts over this. The US claims China's access to countries' telecom infrastructure threatens US national security. And has threatened to share less intel with countries that work with Huawei. Now, the UK is saying 'pish posh, I do what I want.' But that it would only let Huawei update "non-core" parts of its 5G network. The move tests whether the US will follow through on its threats – and perhaps lessen security ties with one of its closest allies.

Brexit. Yesterday, the head of the Scottish parliament called for a referendum to leave the UK if it goes through with its messy EU divorce. The last time Scotland voted on whether to break up with the UK was in 2014. It voted not to. But in the 2016 Brexit referendum, almost two-thirds of Scots voted to stay in the EU. Now, the gov says it will intro legislation to kick off another referendum by 2021. Good luck with that: the UK says it won't allow it. Isn't it ironic.

What people with kids have opinions on...

Screen time. Yesterday, the World Health Organization issued its first guidance to limit screen time for kids under five. It didn't say how harmful it could be but flagged that the lazy life is a leading risk factor for death. WHO are you calling lazy.

Measles. Thanks to things like the anti-vax movement and international travel, measles is having a real moment in the US. The US is now in its worst outbreak since 1994.

Lego. We thought we'd end on something nice. The toy company just unveiled a project to help blind and visually impaired kids learn Braille. More of this please.

Skimm More: We sat down with Melinda Gates to discuss vaccinations. Here's what she had to say.

When you spend all day sitting at your desk...

Skimm This. Aka our daily news podcast has news you'll want to be standing up for. And it drops every weekday at 5pm ET.