Daily Skimm: Voters Far Away, Shooting in California Synagogue, and the Darkness of "Game of Thrones" 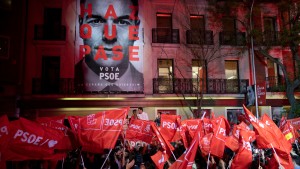 THINGS VOTERS FAR AWAY ARE WATCHING

Spain's been going through some changes. Separatists in Catalonia have been having a moment. Problem for Spain, because Catalonia – the part of Spain that includes Barcelona – makes up a big chunk of its economy. This latest prime minister – who came to power last year – has been trying to keep Catalan separatists happy. It's been a challenge and has alienated some Spanish nationalists. Cue parliament teaming up against him and refusing to pass his 2019 budget. But, hello, it's April and Spain needs a budget. Which brings us to this snap election.

The PM's socialist party won the election but will need to cobble together a coalition with other parties. One of the new parties gaining steam is the nationalist, far-right party Vox.

This election showed fractures in Spain's political system – and marks the first time the far-right won a sizable presence in parliament since the end of Spain's dictatorship in the '70s. It's a trend that many other countries in Europe are already getting used to.

There have been ongoing tensions between the two countries ever since Russia annexed Crimea in 2014. And Russian President Vladimir Putin has been trying to get a tighter grip on the area ever since. His recent move: offer citizenship to Ukrainians in areas controlled by Russian-backed separatists. He then said he was thinking about extending his offer to all Ukrainians. Enter, Ukraine's new president.

You would be correct. Last week, actor/comedian Volodymyr Zelensky won the presidency by a landslide on an anti-establishment campaign. He didn't offer a lot of specifics into his policy agenda, so everyone's been waiting for clues into how he'll approach neighboring Russia when he takes office in June. Now we're getting a good glimpse. Over the weekend, he said 'not today' to Putin's offer and instead offered Ukrainian citizenship to anyone who suffers from authoritarian and corrupt regimes, but especially to Russians, who he said suffer the most of all.

The relationship between Ukraine and Russia has implications for the EU's economy, in addition to being a very sensitive security situation. And people aren't sure what to make of this new actor-turned-president. It's unclear if this latest move is all talk or an indication that he's open to playing tough with Ukraine's very large, very emboldened neighbor to the east.

Earlier this month, the country went to the polls. It was the first time the country's tens of millions of voters turned out to choose not only a president, but members of parliament as well. The gov decided to cut down the election process to just one day, apparently as a way to cut costs. The problem: Indonesia is huge (think: 193 million eligible voters), and made up of thousands of islands. And all of those votes have to be counted by hand by the end of next month.

Over the weekend, it came out that at least 272 election workers have died, mostly from fatigue-related illnesses from working long hours counting votes. More than 1,800 have gotten sick. The government says it'll compensate the families of those who died. And is reportedly working to make sure health facilities prioritize care for election officials.

The country's election commission is reportedly getting heat for its treatment of its staff. And is bringing attention to issues of poor work conditions and overworking staff around the world.

What has people saying 'not again'…

The shooting in Poway, California. On Saturday, a man armed with an AR-15-style gun stormed a synagogue north of San Diego where Jews were celebrating the last day of Passover, killing one woman and injuring three others – including one who was trying to get children to safety. The woman killed was 60-year-old Lori Kaye, who threw herself into harm's way to protect the rabbi.

Who just paid their event planner...

Labor unions. Over the weekend, at a union workers' forum in Las Vegas, six of the many Democratic candidates running for president backed a $15 federal minimum wage and promised to strengthen workers' rights. Because you know what else labor unions know how to organize? Votes.

The NRA. Over the weekend, during the NRA's annual convention, the group's president was ousted. Casual. The announcement came as the gun rights' group faces several lawsuits, declining membership dues, and reports of financial mismanagement. On top of it, New York's attorney general is investigating whether the group is in violation of its tax-exempt status.

Skimm This: Our podcast went into why the NRA's been having a rough time. Listen here.

What to say when you blinked and missed the White House Correspondents' Dinner...

Keep blinking to see through the darkness of last night's "Game of Thrones" ep.

…Oh and speaking of things that everyone and their mom watched this weekend: "Avengers: Endgame" made bank.

When you need something to spice up your cheese board…

Skimm This. Our daily podcast has a royal cheese you need to know about. And it drops at 5pm ET every weekday.