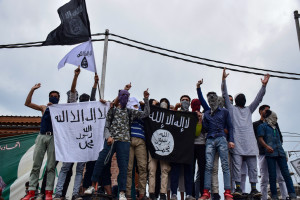 The leader of ISIS

Who exactly are we talking about?

His name is Abu Bakr al-Baghdadi. Back in 2014, he declared himself the ruler of ISIS's caliphate (aka an Islamic state) in the Middle East. He's helped the terror group commit mass killings and has inspired attacks across the world, particularly in Europe. He's considered the world's most wanted man – and the US has offered $25 million to anyone with info on his whereabouts.

So why show up now?

Well first off, we should say there are reasons to be skeptical that it's actually him. The government hasn't confirmed it. Plus there have been recent reports questioning whether he's actually still alive, since most of his top associates have been killed. And in recent years, al-Baghdadi hasn't appeared in any videos – but ISIS has put out audio recordings it claims are his voice.

Ok but what if it's actually him?

Then it appears he's trying to send a message. ISIS claimed territory in Iraq and Syria years ago, and a coalition has been trying to drive the terror group out ever since. In 2017, Iraq said 'mission accomplished.' This year, US-backed troops in Syria said 'same.' Now, the man who claims to be al-Baghdadi seems to be trying to show that just because the group has lost its territory doesn't mean it's going away. And that it can still wage deadly attacks, like the one in Sri Lanka earlier this month.

ISIS's attempt to build a caliphate in Iraq and Syria was foiled. But the group has still managed to build a network of terror across the globe. And the alleged re-emergence of its leader serves as a grim reminder of the danger it poses.

What's going through more updates than your laptop…

The Trump admin's border policy. Yesterday, President Trump told his admin to look into new regulations for the US asylum process. Among the things he wants to put in place: a fee for asylum applications, and banning migrants who enter the US illegally from working while their claims go through court. The admin has 90 days to write up new rules.

Who could use a vacation more than you…

Deputy AG Rod Rosenstein. Yesterday, he handed in his resignation letter, after a bumpy tenure. Rosenstein helped write that memo justifying the firing of former FBI Director James Comey. And appointed special counsel Robert Mueller to lead the Trump-Russia probe – something President Trump has been critical of. Plus there were those reports that he wanted to recruit Cabinet members to invoke the 25th Amendment to remove Trump from office. You know, just another day in the office. This comes as no surprise: he was expected to tap out after AG William Barr was confirmed (which happened back in February). Rosenstein will officially be OOO in mid-May.

Spotify. The world's largest music streaming service now has 100 million users handing over cash money for their subscriptions. Its closest competitor (you might have heard of it, it's called Apple Music) has 50 million paying users. Ball's in your court, Tim Apple.

Marriott. The world's largest hotel company is coming after Airbnb. It'll soon start taking reservations for 2,000 homes after a pilot program in Europe. It's hoping to attract customers with its luxury properties and loyalty program.

...Oh and speaking of Airbnb, its CEO reportedly says it'll be ready for an IPO later this year.

$: What's money got to do with it? Here's what IPOs could mean for your wallet.

John Singleton. Yesterday, the filmmaker died after being taken off life support. He was 51. He'd suffered a major stroke earlier this month. He's known for the film "Boyz n the Hood," which earned him an Oscar nomination for best director – becoming the first black director and the youngest person (at just 24) to be nominated in the category. He also directed episodes of "The People v. O.J. Simpson: American Crime Story," "Billions," and "Empire." Celebrities around the world expressed their love for the "brave artist." RIP.

When there's been some beef with beef...

Skimm This. Our daily podcast has all the real news about fake meat. And all the other news you need to know, everyday at 5pm ET.