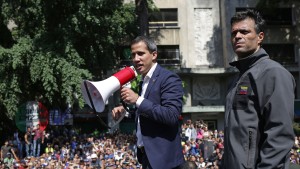 THINGS THAT ARE EVOLVING

The situation in Venezuela

It's been a second, remind me.

In recent years, millions of people have fled the country as it deals with hyperinflation and shortages of basics like food and medicine. A lot of people blame the socialist administration of Nicolás Maduro. And have called his re-election last year a sham.

Is that what the latest crisis is about?

Yes. In January, opposition leader Juan Guaidó invoked the country's constitution to declare himself interim president until new elections happen. Maduro has refused to step down – and countries like Russia, Bolivia, and Cuba are backing him. The US and dozens of others – including most Latin American countries – are backing Guaidó.

Yesterday, Guaidó called for an uprising against Maduro. Thousands turned out in response. And yet...

Guaidó had said he has the support of many military officials. So many watched to see if yesterday's events would lead to a major break in military ranks, potentially even putting an end to Maduro's rule. It didn't turn out that way.

How did it turn out?

The country's head of intelligence came out against Maduro. But other top leaders expected to join Guaidó – like the country's defense minister and head of the supreme court – didn't. Meanwhile, dozens were injured as the two sides clashed. One video showed an armored vehicle ramming into a group of Guaidó supporters.

Guaidó isn't giving up. He's calling for Venezuelans to turn out again today in what he says will be the country's largest march, ever. Meanwhile, Maduro's been referring to all this as an attempted coup. And is calling on his supporters to turn out today, too.

For weeks, many have been waiting to see whether Guaidó succeeds in what's been the most serious challenge yet to Maduro's rule. And whether a change in leadership will bring relief to the millions of Venezuelans suffering from shortages of food, medicine, water, and power. They're still waiting.

Special counsel Robert Mueller is back.

One more time, just to drive the point home.

You said it. Muller wrote a letter in late March to complain that Barr's summary to Congress didn't have the necessary context and was creating confusion about his team's work. Interesting, since more than two weeks after the letter, Barr testified before the Senate and said "I don't know whether Bob Mueller supported my conclusion."

How are lawmakers reacting to Mueller's letter?

They want to see the letter ASAP. Some even say Barr should resign. And since he's scheduled to testify before the Senate Judiciary Committee today, lawmakers will definitely be asking for an explanation. Meanwhile, expect the calls for Mueller to testify publicly to get louder.

The letter is another sign that there seems to be a disconnect between the Justice Department and the special counsel over the findings of the investigation. And will likely add to the list of reasons Dems have to accuse Barr of protecting the president.

The University of North Carolina-Charlotte. Yesterday, two people were killed in a shooting there. Four others were injured. The suspect – who's reportedly a student there – was taken into custody. It's still unclear what the motive was, but this happened on the last day of classes.

Infrastructure. So hot right now. Yesterday, Democrats said they agreed on a potential $2 trillion infrastructure plan with President Trump. That would include repairs to highways, railroads, bridges, and broadband across the country. If this manages to come together, it's unclear if Republicans would back it. But both Dems and the White House called yesterday's talks positive and productive.

Skimm This: Our new podcast – which drops every weekday at 5pm ET – talks about why infrastructure updates are important and what could happen next.

Mohamed Noor. Yesterday, the former Minneapolis cop was convicted of murdering an unarmed woman. In 2017, Noor shot a woman who approached his squad car after calling 911. Her death prompted protests, led to policy changes in the city's police department, and pushed the police chief and mayor out of their jobs. Noor reportedly said that he feared for his life during the trial. He'll be sentenced next month.

Graham Spanier. A federal judge reportedly overturned the former Penn State president's child endangerment conviction. In 2017, he was convicted in the Jerry Sandusky scandal for failing to report an incident between Sandusky (the former Penn State assistant football coach) and a young boy. This reported decision came a day before he was set to start his prison term.

What parents are worried about…

Teens. A new study says that teen suicide rates went up after "13 Reasons Why" premiered on Netflix in 2017. Important to note that while the study says the rates spiked in the month after its release, it doesn't prove that the show caused the suicides. Netflix said it's working to "handle this sensitive issue responsibly."

Kids. A report from the Children's Defense Fund says that about 13 million kids in America are living in poverty. Which can affect their education, nutrition, and risk of homelessness and maybe even violence. The group is calling on lawmakers to take action by increasing the federal minimum wage and providing more access to housing vouchers.

When you're not quite sure about this whole adulting thing…

Here, have a sticker.

When Japan's emperor has a new groove...

Skimm This. Our daily podcast has the low-down on who's wearing the emperor's new clothes next. And all the news you need to know, every weekday at 5pm ET.